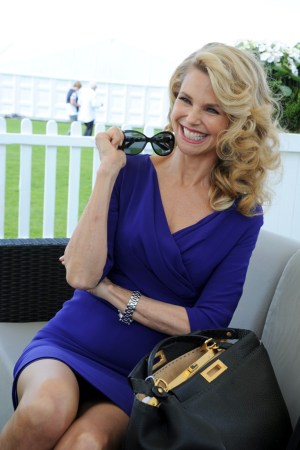 “It’s my first day in the sunshine, and I love horses!” said a chirpy Christie Brinkley from her shaded perch on the grounds of the Cartier International Polo. “I love the rodeo, and I was a cutting horse champion — the best way to describe it is ice hockey on a horse.”

Brinkley is starring as Roxie Hart in the West End production of “Chicago.” Sunday was not only her first day off since she arrived two weeks ago, but it was also England’s first dry, sunny day in nearly two weeks. And Brinkley was definitely in her element: Her first horse, she said, was a polo pony, she loves following the matches in the Hamptons. And she feels the players’ pain.

“I know what it’s like to bump your knee at that speed,” she said.

Le Bon, dressed in one of her mother Yasmin’s vintage Seventies dresses, was thinking more about strings than saddles: She has just learned to play the guitar.

“I only started learning in February, and I got quite good quite quickly, which really annoyed my dad,” she said, referring to her father Simon.

Designer Ben de Lisi, meanwhile, has been keeping his fingers busy with one unusual commission.

“I’m re-inventing the NHS hospital gown,” he said. “It won’t open at the back anymore, but at the shoulder and the sides — and it’s reversible.” And his label’s going on the new design.

As for Hervey, her future — at least for now — is far from Britain. She’s jetting to Florida next month to begin training for a BBC TV reality show, where she and her sister Lady Isabella Hervey will hunt for lost treasure on Cocos Island, a scuba divers’ paradise off the Pacific Coast of Costa Rica. The aristocratic sisters, whose family holds an antique map of the island, will be looking for life-sized, solid gold, nativity statues plundered by pirates.

“We weren’t interested in doing any cheesy reality show,” she said. “This is really substantial — and actually quite scary.”