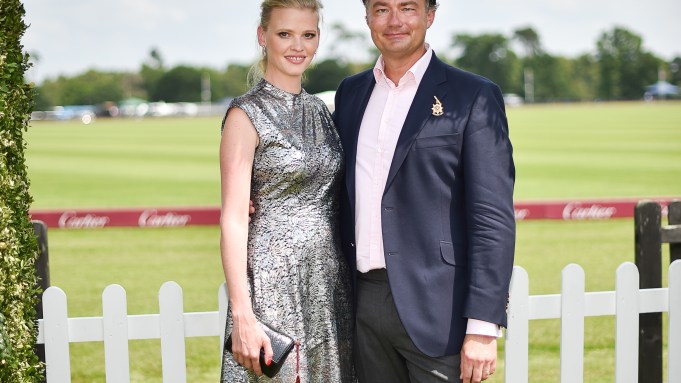 BALL GAMES : “Look at the beautiful people; isn’t it brilliant?” remarked author Jilly Cooper, taking in the marquee at the Guards Polo Club near Windsor for the final of the Cartier Queen’s Cup Polo on Sunday. “Just look at all these flowers; Cartier do it so splendidly, getting it all out here. Imagine all the people getting up at 4 o’clock in the morning to do those flowers.”

Cooper, who arguably put the game of polo on popular culture’s radar with her saucy equestrian-themed novels, including “Polo,” written in 1991 and full of promiscuous aristocrats, naive ingénues, sporty heroes of either the humble or braggartly varieties, unscrupulous villains and scheming neighbors.

“Aren’t they all marvelous?” she observed, mischievously eyeing up the glamorous crowd gathered in the 86-degree heat, no doubt providing plenty of inspiration for the writer, whose latest euphemistically titled book, “Mount”, was released last September.

From the aristocracy, there was Lady Violet and Lady Alice Manners, Lady Kitty Spencer and Viscountess Weymouth, who wore a floral Dolce & Gabbana dress and scarlet Aquazzura “Wild Thing” stilettos – not the best option for divot-reading.

The Queen, in a bright floral dress, white gloves and pearls, was joined by Cartier U.K. managing director Laurent Feniou after the match to award the Queen’s Cup to the RH Polo team, which beat La Indiana with a last-minute goal on the bell in the sixth chukka.

The match, a highlight of the British summer social calendar, fell on Father’s Day in the U.K. and Charles Delevingne, father to Poppy, Cara and Chloe, was overheard lamenting that he’d only heard from his oldest daughters. “Cara’s probably still asleep; you know how she is,” he said.

Jordan, escorted by husband Steve Aspinal, had also ignored Father’s Day. “I said to Steve this morning, with a screaming baby in one arm, frazzled, ‘Do you mind if we postpone Father’s Day next week? I don’t think today’s the day for it. We’ve got the polo and a birthday party later; I could give you a lot more love next weekend,'” she told WWD.

After the prize-giving, DJ sets from Marc Ronson and Hugo Heathcote got the crowd even sweatier, as espresso martinis kept energy levels high – the 650 bottles of Cartier Champagne consumed throughout the course of the afternoon didn’t hurt either.