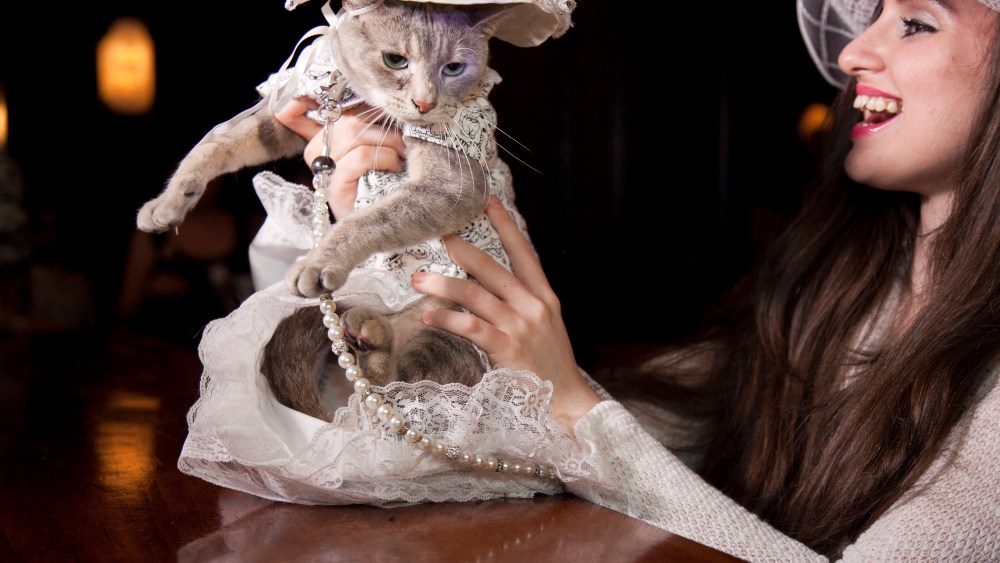 A fashion show of a different sort was underway on Wednesday night at Midtown’s Algonquin Hotel. The 12-story hotel opened in 1902 — an official New York City Historic landmark — has a thing for cats.

As the story goes, in 1932, a stray cat wandered into the lobby, and the late actor John Barrymore, a frequent guest of the hotel, named him “Hamlet.” Ever since, the Algonquin has always kept a resident cat, named either Hamlet if male or Matilda if female.

To honor the tradition, the Algonquin hosts a Cat Fashion Show each year to benefit animal welfare charities. The 10th annual event predictably drew “cat people” of all sorts, from Leslie Martini, a Boston-based author touting her latest children’s book, “Matilda, The Algonquin Cat,” to general enthusiasts, many of them sporting cat-printed shirts and cat-eared headbands.

Backstage, cats were seen stretched out in their individual stations, posing begrudgingly for pictures. It’s fiercely competitive this modeling stuff, and several of the cats had their business cards and Instagram handles prominently displayed. In a matter of minutes, all 10 of them, dressed to the nines in custom designs, would have their moment in the spotlight on a makeshift “runway” adjacent to the hotel’s lobby.

All of the kitty costumes were handmade in New York by Ada Nieves, a longtime pet fashion designer, stylist and FIT graduate whose animal costumes have been featured in segments on “Anderson Cooper 360,” Animal Planet and the now defunct “Late Show With David Letterman,” among others.

Reached by phone, Nieves — who is based in New York but was unable to attend the show due to a busy work schedule — said she was inspired to design pet clothing after adopting her chihuahua back in 2002. “The New York weather is always cold, and she needed to be covered,” said Nieves, who would design outfits for her dog that imitated the runway looks of Oscar de la Renta. “I just thought, ‘Why not make it fun and make it fashionable?'”

This year, Nieves was tasked to design costumes in tune with the show’s theme, “Through the Decades,” which celebrated the hotel’s famous guests throughout history — Marilyn Monroe, Joe DiMaggio and Dorothy Parker to name a few. “The owners give me their cats’ measurements and then I make outfits that are inspired by the theme,” Nieves said of her process. “I know all my models personally, and I do the casting myself. I’m always searching for new talent.” From conception to completion, the elaborate costumes — which include hats, wigs and jewelry — take Nieves a year to complete.

Aine, a blue lynx point Himalayan who resides in North Salem, Westchester County, was participating in the show as a first-time cat-walker. Dressed as Monroe, she wore a pink satin bow dress and a blonde wig. Her companion Aodhan, a red Tabby Persian and a more seasoned runway model who has even appeared on “The Tonight Show Starring Jimmy Fallon,” was dressed as DiMaggio in a New York Yankees jersey.

Cats can be notoriously finicky and, much unlike the standard Golden Retriever puppy, rather selective with their affections. For many owners, it’s part of their unique charm. Most of the cats at the show — save for an alert and curious kitten named Midnight, of the exotic Savannah breed — seemed nonplussed by all the hullabaloo. Others simply slept through it.

“Cats are not like dogs; they’re very particular. But my experience, during these past four years, has shown me that most animals like being dressed up because of the attention that they get from it,” said Nieves. “Their temperament can vary though. You never know what side of the bed they’re going wake up on. They don’t let you know until the moment.” (Meow.)