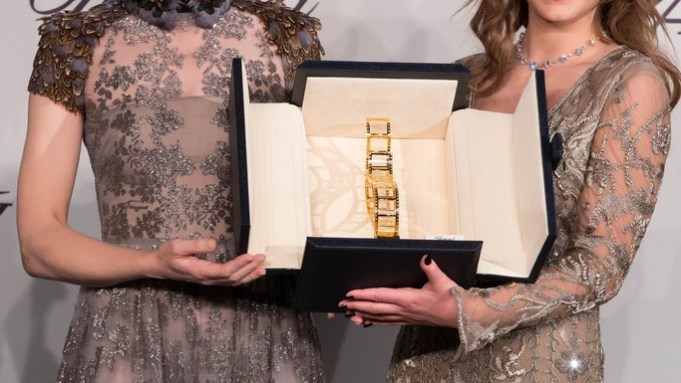 The Oscar winner handed the Chopard Trophy for emerging talents to Adèle Exarchopoulos and Logan Lerman at a ceremony at the Martinez hotel attended by Thierry Frémaux, the general delegate of the Cannes Film Festival, and jury members including Harvey Weinstein, Atom Egoyan and Lee Daniels.

Blanchett took to the stage in a sheer Valentino gown with silver metallic floral lace embroidery, accessorized with shrimp earrings and a snail bracelet from the Chopard Animal World Collection.

The Australian actress was generous in her praise for the winners. “I have an inappropriate crush on both of them,” she said. “I’m happy you have a crush on me, because I have a crush on you, too,” Exarchopoulos retorted in French-accented English.

Egoyan, a Cannes regular, was preparing for the next day’s screening of “Captives,” one of the 18 films in competition for the Palme d’Or, the top prize at the festival.

“There’s no better place to premiere a film,” the Canadian director enthused. “I mean, the screen is fantastic. It’s scary, because, you know, the world is seeing it tomorrow morning, and I’m going to walk into a press conference without knowing really what that first response was.”

Egoyan enquired if any brands were launching products during the festival. “I’ll introduce my particular form of cologne tomorrow with the press conference. ‘The Sweet Hereafter’ — that’s the name of the cologne,” he said jokingly. “I should have done it with ‘Exotica.’ That’s a better name for a perfume.”