Rooney Mara, Rose Byrne and Bobby Cannavale turned up to toast the actress. 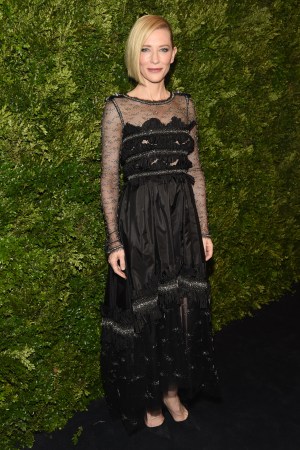 “Holy guacamole…” Cate Blanchett sighed into the microphone on Tuesday night. One would think the movie star would be accustomed to massive adulation at this point. But at the MoMA Film Benefit held in her honor, Blanchett was semi-speechless as she ascended the dais.

To be fair, she had been preceded by quite an outpouring. Three of her closest collaborators — Julian Rosefeldt, Todd Haynes and Ralph Fiennes — had sung her praises in a formal presentation, which wound down with a Blanchett highlight reel.

“Thank you for a very well put-together reminder for how much I’ve aged,” she said of the montage. The actress went on to thank everyone from Haynes for his “vision” to Harvey Weinstein, someone she characterized as “a longtime adversary and collaborator.” The remark gave Georgina Chapman a chuckle. Other Blanchett collaborators — “Carol” costar Rooney Mara et al. — dotted the audience along with Chanel-favored socials Jen Brill, Vanessa and Victoria Traina, Ariana Rockefeller and Diane Kruger (Chanel underwrote the event).

After the ceremony, the room migrated upstairs to the dining room where a phalanx of handsome, smiling servers waited. Naturally, given that the audience had just viewed essentially Blanchett’s IMDB.com page, cocktail conversation soon drifted toward her work. “’Blue Jasmine’ is brilliant,” one guest said firmly, procuring a flute of Champagne from a tray wobbling past. Those who had made it to the New York premiere of “Carol” the night before insisted it was Blanchett’s best, calling it “an important film” over and over again. Then a dissenting opinion was shared: “Is it bad I loved her in ‘Cinderella’?”