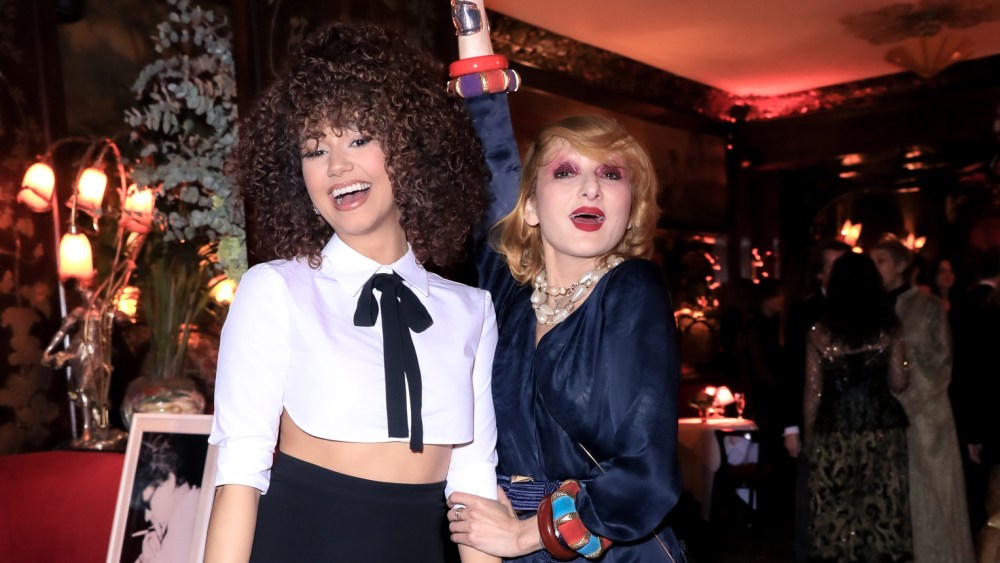 Catherine Baba issued a special invitation for the first Devotion Gala at Maxim’s de Paris. The mission: to celebrate life.

Baba, a longtime stylist, costume designer and fashion world fixture who has worked for Balmain, Givenchy and Cartier, as well as Vogue, Vanity Fair and Harper’s Bazaar, was diagnosed with leukemia in 2019. Since her recovery, Baba has devoted her time to raising funds for the Necker Hospital in Paris, where she received treatment.

“We’re here tonight to celebrate life,” she said. “I know a lot of amazing people and I reached out to all my friends. So it’s really bringing the creative forces from fashion, art, music and people I’ve worked with in cinema and different dimensions to come together to raise money for this cause.”

French fashion influencer Lena Mahfouf and designers Christian Louboutin and Vincent Darré were among the guests, alongside Saint Laurent worldwide VIP director Emmanuel Tomasini, and models Marisa Berenson and Farida Khelfa, both of whom are ambassadors for the charity. French actor Vassili Schneider, singer Alexia Gredy and model Clément Dezelus were also part of the very chic crowd.

Ever the dreamer, Baba believes Devotion can bring together creatives for a cause. She envisions brands collaborating with the organization, or other causes, to create some good in the world. A smaller event earlier this year raised funds for Ukraine.

“I was just maybe a little bit bored of seeing all these brands collaborating together and not necessarily taking it further,” she said. “Working as a creative in this industry, at one point it’s like something’s got to give. I found myself at a crossroads and after my ‘rebirth,’ I really needed to create something that can take me further within the creative realms, but something not just disposable, not just stuff. We’re all in this together, and we can uplift more than selling more toxic disposable stuff,” she said.

And create she is, with Devotion soon launching two collaborations. First, Baba is partnering with Rick Owens and artist Connie Fleming on a t-shirt and turban collection, with Owens donating 100 percent of production to the association. She’s also working with French bespoke leather goods and outerwear house Chapal on a coordinating jacket-and-helmet combo, which will be available in pink, gold and silver. That collaboration will help mark the brand mark it’s 190th anniversary, with 15 percent of profits going to Devotion.

Fashion and art contributed to the night, with stacks of luxury goods and artworks donated for an auction and raffle. A painting from The Clash’s Paul Simonon, a sketch from Christian Lacroix, and a photo taken by R.E.M.’s Michael Stipe were among the pieces for auction. Many of the pieces came with accompanying “love letters” from the muse to the artist, including Kate Moss to David Sims and Pat Cleveland to Richard Bernstein. Items from Acne Studios, Givenchy, Loewe, Louis Vuitton, Dior, Nanushka and Christian Louboutin were included in the raffle.

Mahfouf arrived for the cocktail in Valentino, sporting a cropped top after checking her coat at the door.

“She’s so brave and athletic. She just looks so energized and always smiling and bubbling,” the influencer said of Baba. Mahfouf reflected on the idea of fragility and having the support of community.

“Life is always good, but then you have an illness and it makes you very lonely. So tonight, I hope she can share that feeling of loneliness that she might have had. When you are living through something that makes you feel very lonely, it feels good when you can share it with people who just want to hear you. She’s very inspiring,” said Mahfouf.

Baba took to the dance floor to begin the auction, which included a bit of chatting with friends and lots of warm embraces sprinkled around the room. Luckily enough, Allanah Starr was also one of the guests. The dancer serves as mistress of ceremonies at burlesque shows and put her talents to use to help Baba keep the evening moving with her vibrant energy and plenty of quips.

Guests in colorful ballgowns and vintage costumes worked the room to encourage bidding, while the DJ pumped up the disco music. Designer Rick Owens arrived just in time for the afterparty.

“Creative forces can unite together,” said Baba of her hopes for future Devotion events. “I don’t really want to limit where this can go.”