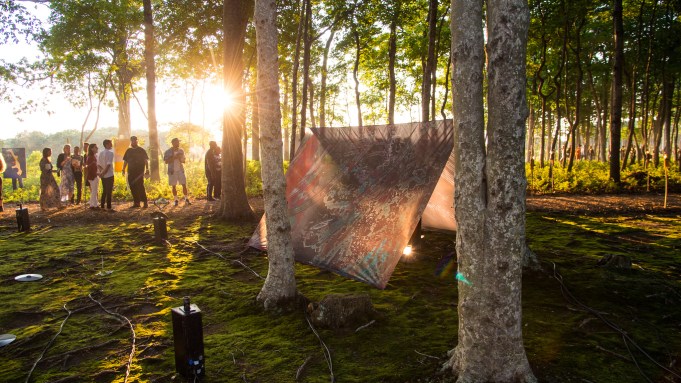 The first thing guests of the Watermill Center Benefit heard Saturday night when they entered the forested grounds where the sprawling art space is located was the steady beat of a snare drum and high hat. The quick booms and snaps were punctuated by a woman’s wailing. The unnerving sound foreshadowed what attendees would find as they wound deeper into the woods — a spectacular and at times terrifying series of art installations.

The pieces — some nestled in the wooded clearings so deeply guests did double takes to ensure they were actually part of the show — ranged from live dance performances to people cocooned in Saran Wrap. That’s not an exaggeration. Two humans at a time entombed entirely in stretchy plastic — some limp, others twitching, strewn about the lawn like dead bodies. Nearby, three people in red feathers with their faces obscured by red stocking caps sat on a roof, dragging violin bows against wood. The noises were dreadful enough to be the soundtrack for this summer’s scariest horror film. Farther down a path lit by tiki torches, a naked man in a plexiglas box sat in a pile of sand, almost drowning in it — the stuff of “Mad Max” nightmares.

“When I make things, I’m always thinking about two things: these woods, and a way that someone can interact with the piece,” John Margaritis, the artist and founder of streetwear brand/creative studio New York Sunshine explained. His piece “Untitled” drew guests eager to catch a photo or video of the cluster of rusted basketball hoops, with two people dressed as the Tin Man and Dorothy from “Wizard of Oz” walking slowly around the work.

“The slower they move, the more eerie and creepy it is,” Margaritis said with a grin.

Farther down the path: an open, gravel area with larger-than-life-size graffitied walls by Lance de los Reyes, and a silent auction where guests bid on paintings and photographs — including one by Christopher Makos of Andy Warhol. Loeb — a first-time visitor to the Watermill Center — checked out the pieces on offer, but stopped to discuss the commissions he’s working on.

“As soon as I get my ass back in New York, I’ve been told by my gallery that I have to finish these by the end of the month,” he said. “I might go to Europe if there’s a moment to spare, but really, I’ve had enough fun. I would be OK with just working the rest of the summer.”

At dinnertime, Weems and Rayner received their awards with an opening speech by the Watermill’s artistic director Robert Wilson. (And for artistic effect, he waited in silence for 45 seconds onstage before beginning his remarks). Rayner, is a longtime friend and supporter of Wilson. She said there was just one piece of art that caught her eye that evening: her sleek, gray WMC Leadership Award. She held it up and laughed.

Weems traveled to the Hamptons that evening having just wrapped a contribution to Kehinde Wiley’s Black Rock Senegal artist’s residence — she helped choose which artists would be included in the program.

“That was really a hard one, because there were so many qualified artists, as there always is,” she said of the process. “You struggle with it. There are certain artists who, it becomes very clear early on, have a sense of perspective and originality and you know that all they need is a little bit of time and some mentorship. As Virginia Woolf would say, ‘a room of one’s own’ in order to make it happen. That was pretty tough.”

In her own speech, Weems mulled her journey through the arts, weaving in and out of feelings of fear and doubt, wonderment and awe.

“The question I have been asking myself over and over is how do we measure a life?” she said. “By what means will you measure your own life? I can’t completely measure it on my own, I’m in it. I’m fighting through it, battling through it. But if this award that I’m receiving tonight marks the journey that I’m on, that I’ve taken, then I am deeply grateful.”