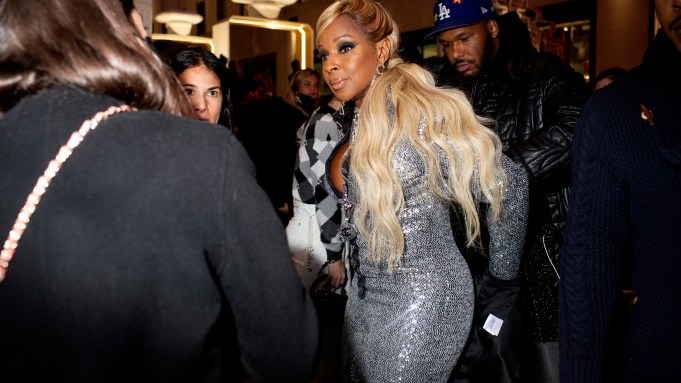 In-person events may be back in full swing, but for many partygoers at Chanel’s party on Friday night, it wasn’t until the soiree that they felt a true sense of a return to normalcy.

“It’s how you know the world is returning back to normal: when Chanel says so,” said “Stranger Things” actress Sadie Sink.

Three days after the brand’s cruise 2022 repeat show in Dubai, it came Stateside for another affair. The party, dubbed “In the Stars” and feting the 100th birthday of the brand’s Chanel No. 5 fragrance, kicked off the opening of an installation in Rockefeller Center.

The ice rink, stamped with the perfume’s logo, served as a stage for a team of figure skaters during cocktail hour. The event was the brand’s first at such scale since the pandemic began.

It wasn’t just a first for Chanel. “This is the first big event I’ve done in two years, and it’s a little emotional,” said actress Phoebe Tonkin. “It’s definitely been a scary year and a half, and it’s a little surreal to be back and seeing all these people I haven’t seen in a while.”

Tonkin just wrapped filming on “Babylon,” the upcoming film from “La La Land” director Damien Chazelle — “coolest, coolest, coolest experience of my life,” she said before shuffling into the festivities.

Although the party marked Sink’s entrée back into partygoing, too, she’s still been hard at work. “I have a short film coming out next week, then a movie with Darren Aronofsky coming out in the new year,” she said. “It was a very intense character, but a lot of fun.”

Ridloff was ending her day at the Chanel party, despite it being the opening day of her film, “Eternals,” which included a lengthy and far-reaching press tour. “It’s a night to celebrate Chanel,” she said. “Next, it’s going to be a solid week of sleep.”

In spite of the cold weather — the event overtook the plaza surrounding the ice rink — guests felt it struck a good balance between cozy and COVID-19-safe. “I’m really grateful, with how large the scale is, that we are outside,” Dorfman said.

The temperature, though, posed challenges for others. “I have toe warmers in my purse,” added O’Grady.

Dorfman, who added that the event was her “first proper date with Chanel,” also mentioned her robust pipeline of projects. “I’ve been working on a book we’re announcing next week with HarperCollins,” she said. “And I’m getting ready to direct my first project, which I’ve been working on for a long time.”

Also joining the soirée was Renée Rapp, the musician and actress of upcoming HBO Max show, “The Sex Lives of College Girls,” created by Mindy Kaling.

“I’ve been with the material for over a year now, and it’s crazy that it’s suddenly all happening. I play a character that you will love to hate in the beginning, she does some questionable s–t, she’s from the Upper East Side of New York,” Rapp said. “When she goes to college, she gets thrown off the ground she walks on.”

The show is taking up much of Rapp’s time, along with a few personal projects. “It’s just ‘Sex Lives,’ as well as my own music,” Rapp said. “That’s the reason I moved to New York in the first place.”