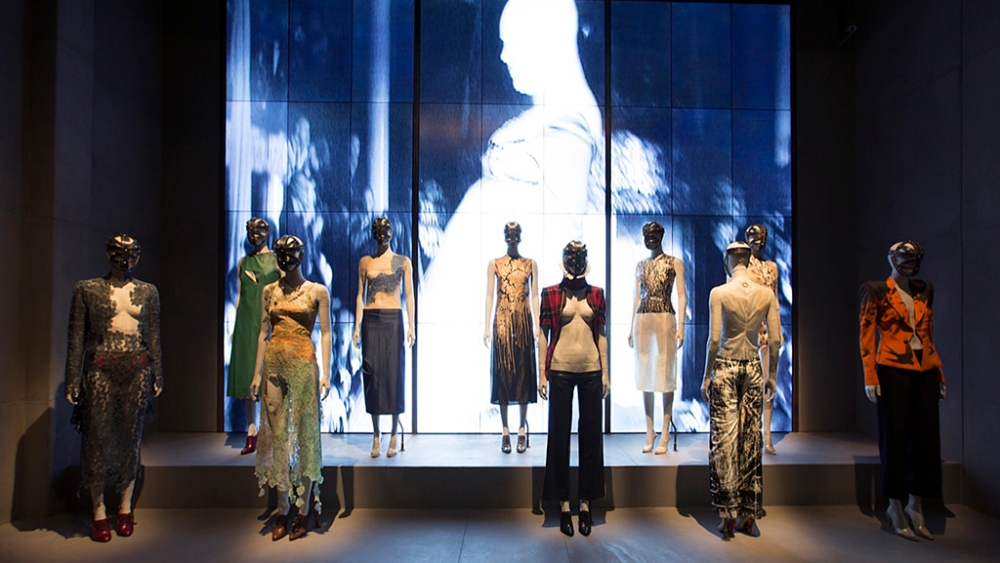 London is poised for six months of magical thinking with a fresh take on the “Alexander McQueen: Savage Beauty” exhibition set to open this weekend at the Victoria and Albert Museum. The show is a window on the restless, labyrinthine mind of the late designer, who considered London not only his home, but also his fountainhead of inspiration.

“Alexander was a London boy, and what can I say? He’s back in town,” said Philip Treacy, whose dramatic creations feature in the exhibition. Treacy was among a crowd that included Sarah Burton, Kate Moss, Stella Tennant, Erdem Moralioglu, and David and Victoria Beckham, who gathered at the V&A on Thursday night to celebrate the opening of the show. Asked to compare the London show with the one at New York’s Metropolitan Museum of Art in 2011, Treacy said London offered a more heightened experience.

Burton said she was reluctant to attend the press view for fear she’d burst into tears. “I’m terrible. I would have been in bits. Lee lived London, and this show feels really personal, really intimate,” the designer said.

Tennant talked about the impact of wearing McQueen. “The clothes make you feel indominable. There’s a soft side to them, too, but the feeling you have is one of power.”

Katie Grand opted to leave her sole McQueen piece in storage. It was a jacket she swiped from the designer’s home in Essex, England, after traveling to visit him with Isabella Blow. “It had been buried underground and the color had oxidized. Now I think it even has gotten moldy,” she said.

“Savage Beauty” is the biggest and most ambitious fashion exhibition ever staged by the V&A — the archives of which McQueen would plunder for research and inspiration. “It’s the sort of place I’d like to be shut in overnight,” he once said. The show has already been extended by two weeks, with 70,000 tickets sold.

While it may follow the template of the original one staged at the Met, the V&A production is bigger, more polished and with greater emphasis on McQueen’s native city. “It is all about coming home,” said Martin Roth, the museum’s director. “My first thought when I saw the show at the Met was: ‘McQueen has to come home.’”

The retrospective, which opens to the public on Saturday and runs until Aug. 2, features 66 additional garments and accessories — including a sculpted white feather gown from the Horn of Plenty show; a blood red ballet dress from The Girl Who Lived in the Tree, and early pieces from the wardrobes of old friends and colleagues including Annabelle Neilson, Katy England, Aimee Whitton and Janet Fischgrund.

It opens with an homage to McQueen’s London, featuring looks from his mid-Nineties shows — the slashed leather pieces, dresses made from corroded lace, and ones bearing tapestry flowers that bleed into streaks of paint. Next door, there’s a short, saucy frock coat with tulle underskirts from his 1992 master of arts graduate collection, and a deconstructed, kimono-style dress that McQueen would use to dress up one of the limited-edition gold cards he designed for American Express, one of his earliest sponsors, and a supporter of the V&A show.

There is a lineup of bumster skirts and trousers — inspired by the looks McQueen witnessed on the streets of his city — and a host of tailored pieces highlighting his training on Savile Row, first as a teenage apprentice for Anderson & Sheppard and later for Gieves and Hawkes. “Everything I do is based in tailoring,” reads one of the many McQueen quotes that run alongside the displays.

The Cabinet of Curiosities, which features accessories by jeweler Shaun Leane and milliner Treacy, longtime McQueen collaborators, is twice the size of the one at the Met. It’s housed in a double-height gallery and interspersed with film footage of nearly all of the designer’s shows.

Meanwhile, the ghostly hologram of Kate Moss, the woman in white silk organza, is bigger this time around.

“In New York, we had her the size of Tinkerbell, while here, she’s much bigger — child size,” said Andrew Bolton, who created the original show with the support of Harold Koda, and was consultant curator of this one, working alongside the main curator Claire Wilcox. The Met show had been produced “on the fly, in nine months, so there were some chinks in the armor. Here, the creases have all been ironed out,” he said, adding the London-themed room in particular stood out because of the “rawness, spontaneity, lack of self-consciousness and modernity” of the looks on display.

During a walk-through of the Cabinet of Curiosities, Nadja Swarovski, whose company sponsored the show, discussed how McQueen operated on another plane. Pointing to a crystal mesh top with an executioner’s-style hood, she recalled how the garment came to be.

“We could never figure out what to do with crystal mesh, which comes in sheets like fabric,” said Swarovski, whose family company had created it in 1993. “People would use it for handbag trimming. But he asked for five sheets of it, and that’s what he did,” she said of the top. “Crystals were never an afterthought with him.”

McQueen would go on to work with crystal mesh for skirts, dresses and other pieces and Swarovski said that once McQueen got going with it, everyone wanted to use it. “We couldn’t produce enough of it — that was a phenomenon we had never experienced before.”

As with the Met, the show is molded around McQueen’s dark — and exciting — preoccupations over the years: The Victorian Gothic tradition; death ever-lurking; nature in all its splendor, horror and decay; his own Scottish heritage, and parallel worlds in the past and future.

The journey is wondrous, sinister, and otherworldly, and the only real drawbacks are the sometimes hard-to-read captions at the foot of the displays, and the discreetly laid-out descriptions of each room’s theme. Visitors would do well to study up beforehand on McQueen, or ignore the captions altogether and allow the clothes to work their magic.