Veteran actors and industry newcomers filled the blue carpet for Sunday’s 5th Annual Critics’ Choice Television Awards at the Beverly Hilton, but it was TV's comedic actresses who had everyone buzzing. 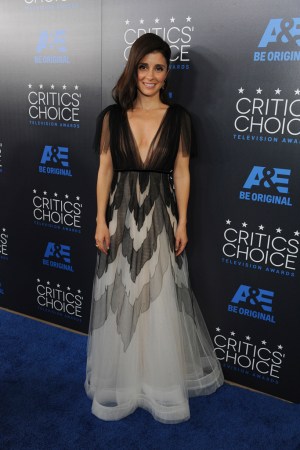 Veteran actors and industry newcomers filled the blue carpet for Sunday’s 5th Annual Critics’ Choice Television Awards at the Beverly Hilton, but it was TV’s comedic actresses who had everyone buzzing. Heads turned twice for Best Supporting Actress nominee Eden Sher, who wore a lacy La Perla bustier dress and debuted a short blonde bob. “I cut my hair the day after we wrapped, then I dyed it blonde yesterday,” “The Middle” star told WWD. “I needed to break free, and get out of my comfort zone,” she added. Sher was hoping to meet fellow comediennes Ilana Glazer and Abbi Jacobson of Comedy Central’s “Broad City.” “They make me sick with envy,” she gushed.

Nominated for Best Comedy Series, Glazer and Jacobson cemented their It-Girl status with understated black and white looks from Tome and Stella McCartney respectively. “We didn’t plan to match,” Jacobson said. “We try to keep it organic, but it feels good when it comes together,” added Glazer. Though it was the first big awards show for the comedy duo, they anticipated a low-key night—they’re due back in the show’s New York City writing room first thing Monday morning.

Constance Wu, a lead actress nominee for “Fresh Off The Boat,” is also an award show newbie. She tapped veteran Cristina Ehrlich to create her look—a romantic floral chiffon gown from New York designer Cristina Ottaviano. “I told [Cristina] my ideas, and I got to play dress up,” Wu said, admitting she was still getting the hang of managing a train. “My boyfriend keeps stepping on it! I keep yelling at him.” Though nominated, Wu’s mission for the night was to see Taraji P. Henson—who wore a studded Alexander Wang dress to pick up the Best Actress in a Drama Series award. “Cookie from ‘Empire,’” Wu yelled, “She is the woman to end all women.”