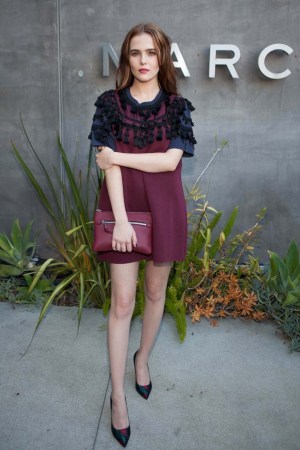 On picking her outfit: “I’ve been styling myself for a couple months, and it’s been really cool because I’m learning more about what looks good on me, what I like. And I found so many pieces that I loved from Marc Jacobs, so it was hard to choose. I felt like it was casual enough, but really detailed and chic. I’ve learned a lot of the times, things that look good in person aren’t necessarily things that photograph as well. Like black looks great in person. Black doesn’t really translate a lot of the times in photos. I’ve learned you have to take pictures before you go and kind of check out all your options. Try to look at the options first.”

On her current and upcoming projects: “Right now I’m doing a play with the Young Playwrights Festival. It supports young playwrights under 18. And then I shoot a movie in New York [which I can’t discuss] and then I go to Cape Cod to do a movie in September, October. I’m superexcited. It’s [called] ‘Good Kids.’ I love the cast. It’s four best friends who are overachievers and the summer before they go to these prestigious amazing colleges, they decide it’s the summer of yes. And it’s a story about their growth and their separation as friends and how they come back together. It’s a love story, and it’s really funny. It’s really well written.”

How did the band get connected with this event?
“It was actually through a photographer who’s really good friends with Marc and shoots for him. He became a fan of ours, reached out. It took us awhile to even link up because we were so busy at the time. We were on tour and out of the country, and then finally we talked to him and became like best friends. His name is Brian Bowen Smith. He’s the connection between us and Marc Jacobs, and from there it’s been Marc fam.

Are you a Marc Jacobs fan?
“When you go into the stores you can find anything for anybody. That’s what’s great. They’ve got new designers [Luella Bartley and Katie Hillier]. They’re doing a great job. You can pick and choose for your individuality and that’s one thing that’s great with fashion and music. I’ve kind of figured it out throughout the year. You’re performing the same songs every night. It’s the fashion that gives it something new every night, that confidence. You come up with something new because you’re singing the same f–king songs. At the same time, when you’re on the road you have so many outfits. It’s so hard to clean them. It just gets to a point where you’re like, ‘F–k it!’ You find one great outfit and buy five of them and you’re good.”

What’s your go-to outfit on the road?
“It’s mainly comfortability. I can’t be too crazy because of the way we perform. It’s rock ’n’ roll when we get out there. Just tight pants, boots and a really cool top and a leather jacket, and I think the top and the hat really make the difference in my outfit the way I do it these days.”

Have the guys in the band influenced your style?
“The great thing is they’re like, ‘What should we wear?’ They’re open to it. They know that girls usually have a sense of fashion more [than men]. Usually. I’m not saying [always]. It’s never gone to that point where it’s like, ‘Oooh, I don’t think you should wear that.’ Never.”

How long have you been in the band?
“Siouxsie [Medley] and I have been in a band for almost 10 years, and with the guys, it’s been four, almost five [years]. We’re finishing up our second record. We have [a title], but we haven’t announced it. We’re putting the finishing touches on it.”

Will it come out this year?
“Hopefully! [she laughs] The first record, the guys just got into the band, and we just wrote the record like that. There wasn’t any thought, which could be a good thing, too, but I think through the years, we’ve come to really know each other more, and we are more in tune with each other, so we’re taking this record more areas that we didn’t realize we had. More vocals and the guys do backups and stuff like that.”

Dave Grohl has been a big supporter of your band. What does that mean to you guys?
“I don’t think it’s sunk in. I don’t think it’s like, “OK, cool man.” It’s like, ‘Oh sh-t, we better work hard!” It makes us work that much harder. We know him. He’s supportive, which is really great. It’s an honor — an absolute honor — for someone that we’ve idolized to say that [he likes our band]. Uh! That didn’t really happen.” [laughs]

Any touring plans?
“We’re going to be doing some festivals now that we’ve booked. But we’re going to be looking for the fall. We’re working with our [booking] agents at CAA right now, getting something together.”

On why she’s in attendance: “It seemed like a pretty fun event tonight, so why not? It’s so nice out. I was like, ‘I’m not wearing heels. I’m wearing [Kitsuné] sneakers, and I’m going to chill out.”

On Marc by Marc Jacobs: “It’s always somehow really fresh and young and cool. It’s one of those really cool brands, and you can dress up or dress down. It doesn’t ever feel forced. I went to school for textile design, so whenever I can wear prints I try to because they’re like my favorite thing.”

On her upcoming capsule collection with Kitsuné, which does not have a release date yet, but she is “thinking holiday”: “I’m doing a capsule collection with Kitsuné. I’m just starting to design it now, so I don’t know exactly when it will be out, but I’m releasing an EP with them. We thought it would be cool to do [something] on the fashion end with Kitsuné as well. Kitsuné happens to be a [music] label and they have their brand, too, so they’re doing fashion and music things, so I thought it would be a perfect fit for me labelwise and fashionwise. I really like a lot of their stuff because it’s preppy and cute and young, so I asked them if they would maybe like to do a few pieces together, and they were down for it, so we’re just in the beginning stages now. I’m thinking travel materials because my [EP] is called “Across” and it’s about moving from New York to L.A. and driving cross-country, so we’re going to do some fun things together like totes, cellphone cases, little fun stuff.”

On her upcoming EP: “My EP’s going to be out on July 8. I would say like right now it’s a mix between a surf rock album and rap, so it’s like a really big mesh of a bunch of different genres. I’ve been really into toeing the line between different genres, and I think I try not to box myself in in that way. A friend of mine, [producer] Caleb Stone, he’s in Northern California. He’s been in a bunch of different bands. He’s worked really closely with me on this, and I’ve written and recorded everything myself, so it’s been a very personal project.”