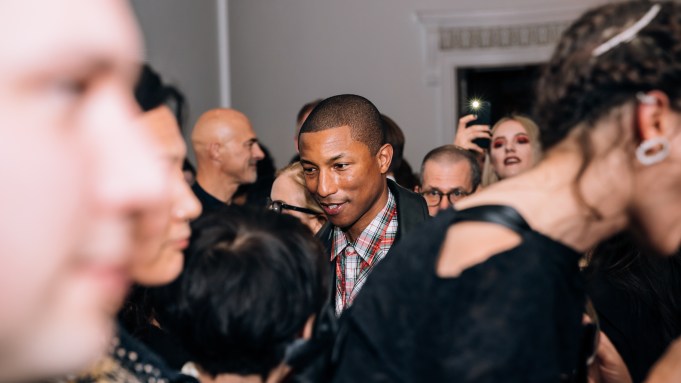 While ripe for a retrospective at the Metropolitan Museum of Art’s Costume Institute,  Rei Kawakubo never quite fit the mold of its celebrity-studded opening gala.

Nevertheless, such adventurous figures as Pharrell Williams and Björk mingled with a mix of avant-garde club kids and fashion industry insiders including Rick Owens and wife Michele Lamy, Brendon Babenzien, Simone Rocha and, of course, the woman of the hour — Kawakubo. The taciturn Japanese designer floated demurely through the National Academy Museum’s imposing rooms with husband Adrian Joffe at her side.

Guests undulated to the pulsing beat of a heavy dance track and refreshed with Dom Pérignon and Fiji water. “It’s Comme, obviously,” said former Japanese Ambassador Caroline Kennedy with a playful roll of her eyes. “Isn’t it fantastic?”

Kennedy’s elegantly ruffled frock was in stark contrast to the bulbous red Kawakubo design donned by Helen Lasichanh who carefully shuffled through the crowd with Williams, her musician husband.

Others on hand to toast the designer’s exhibition at the Metropolitan Museum’s Costume Institute included Thom Browne and Anna Cleveland. Shortly past midnight many filed into the ribbon of black cars waiting along Fifth Avenue as they moved on to the next party.

These include late-night downtown soirées hosted by Rihanna and Katy Perry.