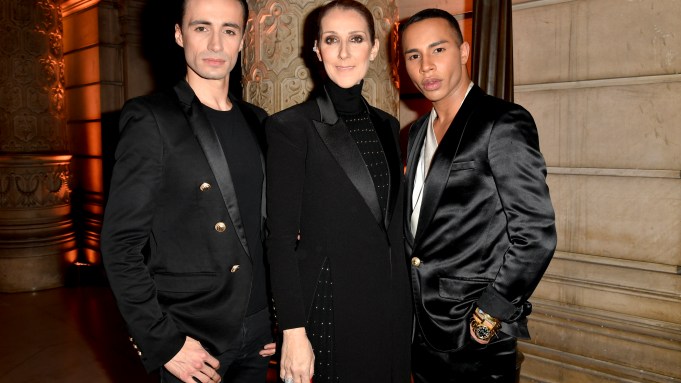 PARIS — Olivier Rousteing has added another megastar to his roster of celebrity fans: Céline Dion.

The Canadian singer, accompanied by her stylist Law Roach, was among the Balmain designer’s guests at the Paris Opera on Tuesday night for the premiere of “Renaissance,” a ballet by dancer and choreographer Sébastien Bertaud featuring costumes by the French fashion house.

“It’s my first time at the opera,” confessed Dion. “I have never had the time or taken the time. I’m in Paris for three days, I have 83 concerts [worldwide], so I’m very busy unfortunately — but tonight was the right night.”

Though it was the first time she had met Rousteing, whose gang of famous friends includes Kim Kardashian and Rihanna, Dion is no stranger to the Balmain brand. “I am a huge, huge fan. I have enormous respect for their talent. I’ve been wearing the label for a long time. It helps me a lot to interpret my repertoire as best I can,” she added.

The performer, dressed in a high-necked black jumpsuit dotted with metallic studs and a black tuxedo coat from Balmain’s pre-fall collection, did not have time to expound on the launch of her own accessories line at Nordstrom in August. A minder whisked her away to catch the second part of the evening’s program, which featured works by four young talents promoted by the Opera through its Academy of Choreography.

Whereas Bertaud drew inspiration from Louis XIV, with sparkly costumes to match, the other performances were more anguished. Who knows what Dion made of “Undoing World,” a tortuous performance accompanied by a soundtrack of French philosopher Gilles Deleuze musing about death?

Still, the audience lapped it all up, heartily applauding Bertaud and Rousteing as they took a bow with the dancers on stage.

“It’s an incredible satisfaction, both personally and professionally, to have the opportunity to be on the stage of the Paris Opera, which is a classic French institution with an incredible history and past, but which also has a lot to say about the future,” Rousteing said.

“Pierre Balmain himself dressed the dancers of the Opera at one time, so in a sense, it’s a return to the roots of the brand,” he added. The project was his first under the tenure of Massimo Piombini, who took over as chief executive officer of the label in April.

“The most inspiring show I’ve seen in my life,” pronounced Jon Kortajarena — though the Spanish model wasn’t about to leap into a pair of tights. “I’m a terrible dancer,” he said with a laugh.