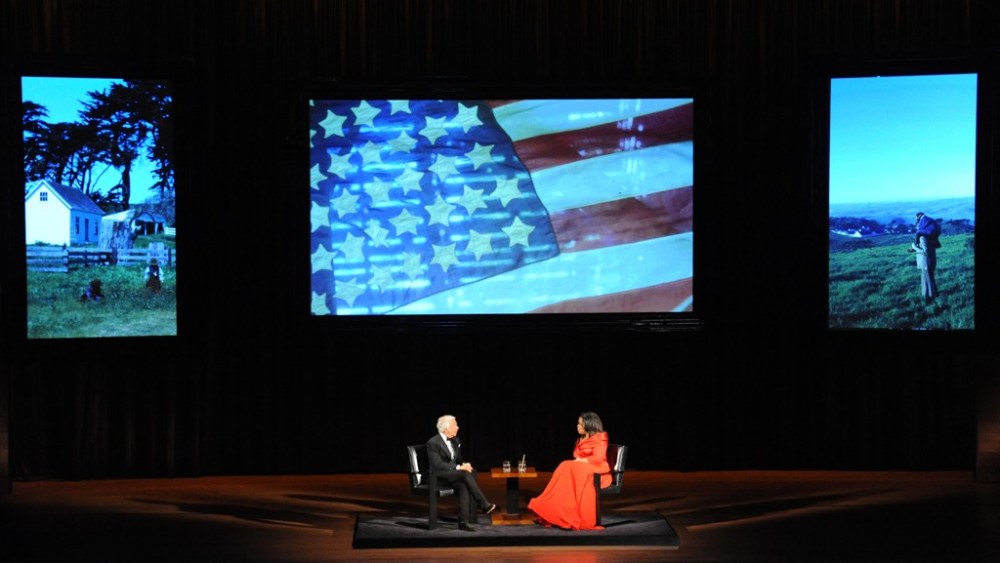 If anyone can bring to life the famous David Letterman Oscars quip, it has to be Ralph Lauren. At one point during the gala dinner that followed his revealing talk with Oprah Winfrey at Lincoln Center, Uma Thurman and the queen of talk were seen huddling together at a table in deep conversation. The topic wasn’t clear (Winfrey, for her part, wasn’t talking to press) but the two made for quite a sighting. They weren’t the only one that night. Major names of fashion, media and entertainment, including Diane von Furstenberg, Bruce Weber, Tory Burch, Barbara Walters, Tom Brokaw, Matt Lauer and Brian Williams came out to salute the designer, who will celebrate his 45th year in business next year.

“Ralph Lauren is so much more than a brilliant designer or an ingenious businessman,” Winfrey said in introducing the designer before their conversation on the stage of Alice Tully Hall. “The name Ralph Lauren evokes a flawless picture of who we can be, on our very best day. It evokes a lifestyle, the kind that we all wish we could live, and that, actually, he is living.”

If there were any doubts about it, Winfrey introduced a video about Lauren’s world, ranging from charming, informal home videos of the designer with his wife, Ricky, and children Andrew, David and Dylan, to runway footage from his early collections and images from campaigns that have helped turn Lauren into one of the world’s most powerful fashion brands.

It left everyone impressed. “I loved seeing all the family and Ralph through the years,” von Furstenberg said.

“I want to be on the horse and the ranch,” said Camilla Belle. “Who doesn’t think that when you see these images?”

Even Winfrey, the most powerful woman in media, was in awe. “Boy that’s some video,” she exclaimed.

Throughout their talk, Lauren showcased his sense of humor — which, at times, was self-deprecating — as well as his passion, vision and the hard work that the images exemplified.

“The lifestyle that I have now is something I never thought I’d have,” he admitted. “I just was working and I think somewhere along the way, that’s what happened. It didn’t happened overnight. You can see the toll. I was six four [once].”

He touched on major points in his career, as well as his personal life, from his Bronx upbringing and his parents, who taught him he had to work hard to earn his success, to his vision of American fashion in the global marketplace. Choosing not to sell his first batch of ties to Bloomingdale’s, which asked him to replace his label with the store’s, taught him an early lesson that still informs him to this day. “I closed my bag and said I am not going to do it,” he told Winfrey. “I was 26 years old and just married, and I really was starting my career, and here I was closing the bag and saying, ‘I am not going to sell you.’ Six months later they came back and bought the ties.

Throughout, Lauren stressed how important it was for him to stay true to his beliefs.

“It doesn’t matter if you’re in the movie business, or on Wall Street, it’s the sense of vision,” Lauren said. “Steve Jobs just passed away. When you talk about vision, talk about someone who had a vision about life, and I think on the same level.

“Believe in what you’re doing, and stick to your guns,” he added. “If you work hard and have that dedication, it will bring you happiness and success.”

When Winfrey wanted to know if he ever felt scared, Lauren gave a surprising response. “Every day,” he said. “I go to work every day. I have the sense of urgency and things that I have to do. I know there is competition. There is excitement. There are new grounds to cover. I don’t know if you can call it scared, or just excited.”

Though he couldn’t remember a single mistake he learned the most from, Lauren said failures have only served to make him stronger in the end.

“I think that twice I almost lost my company because I moved too fast, or had the wrong team,” he said, referring to a moment early on in his career when he had a $50,000 loan and was expanding too rapidly, and another in the Nineties when he was advised to seek an injection of cash and turned to Goldman Sachs & Co., which laid the groundwork for the designer eventually to go public.

“I didn’t have the right leadership,” he recalled. “So you get a chance to fight back and come back, and when you have this chance, you win.”

It’s a lesson he learned as a teenager admiring Frank Sinatra. “He had a big drop in his career,” Lauren said. “He was a hot star, and then he lost his audience for some reason, but he made a comeback. It’s sort of a ‘Rocky’ story but that’s the way life is.”

Lauren does not take fame and success for granted. “I don’t think I ever will, not even tonight,” he said. “I am thrilled. I love what I do and if you love what you do, you keep going.”

Despite the homes, cars and other “toys,” he is most proud of his family, and happiness, he said, comes from giving back. The evening raised more than $7 million for The Ralph Lauren Center for Cancer Care and Prevention and Lincoln Center for the Performing Arts.

The crowd was impressed.

“It makes you want to go out and buy Ralph Lauren,” one male reveler was overheard telling his female companion at the dinner.

“It makes you want to go out and buy a ranch in Telluride,” she retorted.

Jessica Alba echoed this general sentiment. “He creates this fantasy about what the good life could mean and I love that,” she said. “I have definitely had a few dreams like having that ranch, riding on a horse, wearing a Ralph Lauren cape.”

But at the dinner for about 500 people that followed at the David H. Koch Theater, Dr. Harold Freeman told the audience about a different side of the man. Freeman admitted he didn’t know who Lauren was when he gave a pitch to a room full of people seeking a cancer treatment center in Harlem. Lauren stood up at the end of the speech and said he would help. “And then he walked out,” Freeman said to laughter, then added that the designer came through and The Ralph Lauren Center for Cancer Care and Prevention was built.

With that, Lauren received his third standing ovation of the night. Freeman lauded Lauren for his philanthropy, and said he never met a man quite like him. The designer reciprocated the praise. Clearly touched, he thanked Freeman for his remarks and the dinner went on into the late hours.

The next day it was back to the norm with no resting on his laurels: Lauren was scheduled to have a sweater meeting at his offices at 1 p.m.