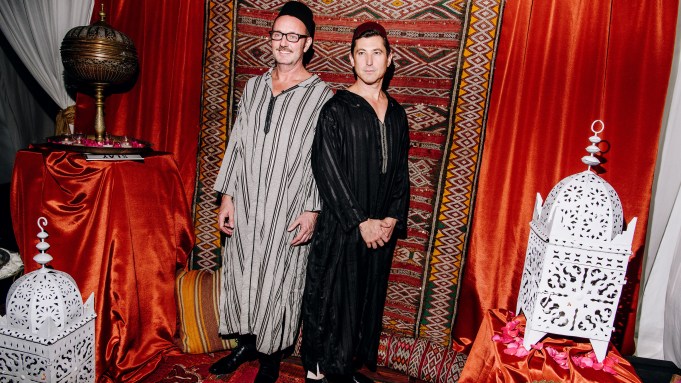 He’d read a study earlier that day that stated residents of urban areas are, generally speaking, more lonely than those who live in rural locations. Silver said he was taken with the idea of designing cities and utilizing spaces to help combat that kind of loneliness.

“We have a lot of spaces in New York City,” he noted, adding one of those places included Central Park itself. He’d come to the park that evening to celebrate the Central Park Conservancy’s Winter Party fund-raiser, along with event cochairs Tracey and Craig Huff, Gillian and Sylvester Miniter, Nanar Yoseloff, and Central Park Conservancy president and chief executive officer Elizabeth W. Smith. The party was themed “A Night in Morocco,” and guests embraced this idea as though it were Halloween. Investment bankers and hedge fund owners threw long, white robes over their daytime suits. One man had assembled a pseudo-North African costume with a pair of old line cook’s pants, a vintage vest and a fez hat he’d borrowed from a friend.

“Do I look Moroccan?” one particularly dressed-up attendee joked when asked about his background.

A traditional Moroccan band and tarot card readers were on hand to provide entertainment, in addition to a post-dinner performance of belly dancing.

According to Smith, who worked as a commissioner for the parks department in former Mayor Michael Bloomberg’s office, the conservancy is one of the most successful private-public partnerships in the U.S. She said the group is responsible for the total restoration of the park, which suffered from a lack of funding and upkeep in the Seventies and Eighties.

“The city was broke, there was no budget for the park, there was no management plan for the park [at that time],” she said. “And it had gotten to a point where it was almost disappearing. There was trash and graffiti everywhere, there was erosion, there was no pruning, there were no lawns, water bodies were filled with debris and choked with invasive plants. It had really been let go for 20 years.”

Now, she remarked, things are different — and there are many more plans for the park being spearheaded by the conservancy in the works. The largest project will be the restoration of the Lasker ice skating rink in Harlem, designs for which will be unveiled soon.

Silver also touched on the Lasker remodeling, saying it will turn an older rink into an area for the 21st century. And hopefully, he added, the space will represent somewhere people can come together.

“You may have an activity going on and people may strike up a conversation,” he said. “That’ll be transformative, not only for the north end of the park, but for the park for another generation.”

Ground Control Wants to ‘Bring Parisians Back to the Champs-Elysées’