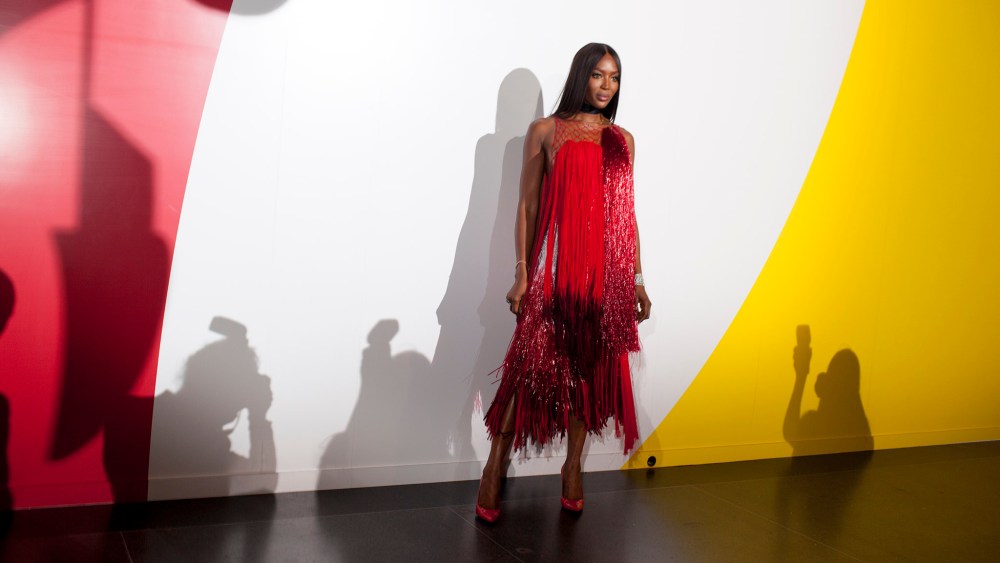 For those who think awards ceremonies might turn stuffy year after year, Brandon Maxwell was there to disagree. And for the designer, the CFDA Awards at the Brooklyn Museum on Monday night weren’t only just a fun night out, but a chance to see one of his icons in the flesh.

“I saw him in his tennis shoes; it was my dream to see him tonight and then he walked in front of us tonight and Joan [Smalls] was like, ‘Oh my god, it’s happening, you’re seeing him,’” Maxwell said.

The man in question was none other than Ralph Lauren, who was honored with the CFDA’s first Members Salute in recognition of his monumental 50-year contribution to American fashion.

It was an emotional night for Lauren’s son David as well. “This is celebrating 50 years of hard work and dedication and love, so it’s hard to put [into] real words,” he said. “It’s almost beyond words; it’s really moving that the CFDA would choose to honor my dad.”

“I just wish Calvin was with me tonight — Calvin, me and Ralph,” a sentimental Donna Karan said.

Fresh from a trip to Ethiopia, Karan scrolled through photos on her phone for reporters to see. “Should I post that I’m back?” she asked. “I don’t know, I don’t know what to do because I’m not done posting Africa.”

Lauren’s fellow honoree Narciso Rodriguez, who received the Geoffrey Beene Lifetime Achievement Award, was feeling reflective over the recognition from his peers.

“I felt a lot of love coming my way over the past few weeks,” said the designer, who is marking 20 years in business. “I’m looking forward to celebrating and getting the tears out of the way.”

The awards were held at the Brooklyn Museum, with Accessory Designer of the Year going to Ashley and Mary-Kate Olsen’s The Row, while Sander Lak of Sies Marjan won the Swarovski Award for Emerging Talent.

The night’s Fashion Icon Award winner Naomi Campbell, in a beaded scarlet Calvin Klein dress, paused to apply lip gloss while photographers huddled around her. Dropping the lip gloss momentarily, it was quickly swept up by her handlers as she stood waiting. “I want to be shot in the light,” she told the photographers, moving toward a brightly lit back wall for her moment (she wasn’t one of the original supermodels for no reason).

Amber Heard arrived with Michael Kors, greeting Julianna Margulies upon entering cocktails, before wandering over to Sarah Paulson, tugging at the “Ocean’s 8” actress’ belt on her Brock Collection dress. Nearby, Tracee Ellis Ross sat on a stool that had magically appeared for her, deep in conversation with Patricia Herrera Lansing.

“Legends only,” Hari Nef shouted at Whoopi Goldberg, who was busy posing with date Christian Siriano.

As Kendall Jenner and Jen Atkin were approached for their photo, the camera-shy Claire Danes and Hugh Dancy ducked behind them, careful to stay out of the shot. The Olsen twins were in a social mood, meaning they allowed two photos before returning to meander.

“Swish!” Virgil Abloh said to a photographer whose shot of him he liked. As Abloh posed, Kristopher Brock and Laura Vassar posed with their date Emily Ratajkowski a few feet away. As they worked it for cameras, Smalls emerged from the bathroom with Maxwell, having done an outfit change (Maxwell had stashed the second outfit in the coat check).

First-time CFDA attendee Kathryn Newton went with her go-to of Red Valentino for the night, taking a break from filming the second season of “Big Little Lies” for the occasion. “I’ve always loved Valentino and I kind of have a relationship with them. And I don’t have a stylist. So I invest in clothes, because I love fashion so much,” she gushed.

Fellow first-timer Lili Reinhart, dressed in Brock Collection, has also graduated to the borrowing stage. “I don’t shop a lot. I get sent things,” she said. A true sign of having made it, dear. The actress will begin shooting season three of “Riverdale” shortly. “My summer is almost over,” she said.

Brooke Shields strutted through the cocktail reception flanked by the Dannijo sisters. “My best friends are still my glasses,” she said as she reached into her bag for them.

The carpet’s last attendee award went to Kim Kardashian, who received the first Influencer Award. Her sister Kourtney stood waiting for her as Kim worked the press line, eventually giving up and heading inside. Patience, patience.