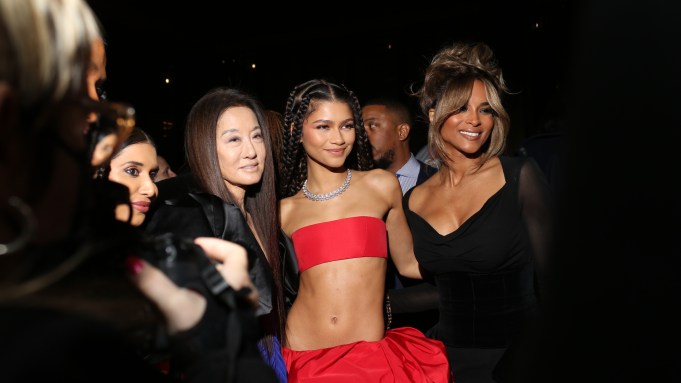 With the news that Daniel Lee is leaving his post at Bottega Veneta, it was already a big fashion news day — and that was hours before the annual CFDA awards had even begun.

Held for the first time since 2019, the annual awards gathered VIPs in fashion and entertainment at The Pool + The Grill in the former Four Seasons Restaurant space in midtown Manhattan, after decamping for Brooklyn in 2019 at the Brooklyn Museum.

The cocktail hour swelled inside The Grill room, martinis and champagne passing about on trays as fashion friends reunited.

Cara Delevigne swept through the cocktails breezily, pausing only to exchange hugs with Emily Ratajkowski.

“Drink! Drink! Drink! Drink!” Christian Siraino repeated as he led Drew Barrymore to the bar, holding hands. Getting some liquid courage was also on the mind of the Michael Kors team. The designer arrived with “West Side Story” actress Rachel Zegler. Ever the host, Kors took drink orders for his posse.

The evening was hosted by English actress Emily Blunt and presided over by Tom Ford, chairman of the CFDA.

“It’s great, it’s really nice and refreshing to see people dressed up again and glammed up and intersecting with one another,” said LaQuan Smith, hugging the bar with Alejandra Alonso Rojas. “It feels like there is a sense of community.”

Of the breaking Bottega Veneta news, Rojas said she felt like it must’ve been Lee’s time.

“I feel like everyone has a time. He really turned the brand around so I’m excited to see what he’s doing next,” she said.

“Same here,” Smith said. “The news was quite abrupt, and I look forward to seeing what his next venture is. But [he’s] very talented.”

As for who she was rooting for, Rojas said Christopher John Rogers had her vote.

Rogers, meanwhile, was “no comment” on the Bottega news. Nominated for womenswear designer of the year, Rogers was in good spirits.

“I feel good. It’s overwhelming but I’m excited,” he said. He was also thrilled for emerging brands Khiry, Theophilio and Peter Do. “There are so many amazing young designers and emerging brands.”

It may have been a big night for him, but it was still a work day after all. “I worked earlier today, left work early, beat my face at home and then met Amanda [Murray] at her hotel and we got her ready and then came here,” he said.

“I didn’t do much [special], honestly. I was working until fairly late in the day so I came home, put on my suit and yeah,” he said.

Vevers is an alum of Bottega so was especially intrigued by the news.

“I worked at Bottega in the early part of my career so it’s very connected. So yeah, I’m curious if he’s going to be here this evening because he’s nominated for two awards,” he said.

“It was important to wear an American designer, and we wanted to go with someone we had a relationship with,” Roach said of the choice, once the photo chaos had died down around the “Dune” star. “She’s worn Vera in the past, and Vera is incredible.”

The duo have been working together for over a decade, from when Zendaya was a relatively unknown name to now, when just about any designer will custom create for her.

“It means a lot. I don’t know. It’s been a journey,” Roach said of her recognition.

He, too, was taken aback by the news of Lee parting Bottega.