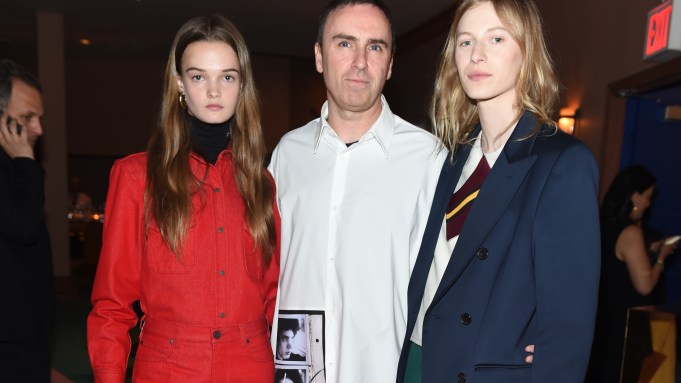 Inside the Hammerstein Ballroom Monday night, the earlier signs of chaos — from a disproven bomb threat near Penn Station — gave way to the annual scene that is the CFDA Awards ceremony.

It was business — and Champagne sipping — as usual.

Jason Wu left date Lily Aldridge momentarily to flock to familiar face Diane Kruger, who was dressed by the Monse team for the evening; retailers, decked out for an unusually celeb-y night, huddled together for group selfies; Hilary Rhoda gushed about salad recipes to a reporter; Maye Musk and Diane von Furstenberg danced around each other in excitement, after von Furstenberg spent most of the cocktail hour taking photos of her dates, the Haim girls.

Of course, the cocktails and a quick dinner were a preamble to the awards, which started on time at around 9 with host Seth Meyers poking fun at the fashion world (what would the CFDAs be without the industry laughing at itself — at least for one night?). The evening’s big winner was Calvin Klein chief creative officer Raf Simons, who walked away with both Womenswear and Menswear Designer of the Year, while Coach’s Stuart Vevers took home Accessory Designer of the Year and Fernando Garcia and Laura Kim of Monse received the Swarovski Rising Star Award.

In addition to designers, the night honored Rick Owens with the Lifetime Achievement Award and Demna Gvasalia as International Designer of the year, plus several women for their contributions to the industry and to women’s rights: Franca Sozzani, the late editor in chief of Italian Vogue, and Janelle Monae, Gloria Steinem and Cecile Richards, for their contributions to the women’s march.

“I can’t tell you what it means to our doctors and clinicians and frankly just everyday women who come through our doors every day to know that important people, folks that they read about in magazines and see on TV, are standing with them tonight,” Richards said on the carpet of the honor.

The presence of such women led many of the celebrities and designers in attendance to reflect on the women of influence in the fashion industry.

“When I was a model, Jil Sander was really big, so I have a great love and respect for her,” Kruger said of the fellow German designer.

Sasha Lane and Chloë Grace Moretz arrived together as dates of Vevers and mingled solo throughout cocktails. “Grace Coddington is a gigantic influence, because she has really stayed true to what she believes throughout her entire career, and she is just a badass,” Moretz said of her pick for fashion’s most influential woman.

Lane was less chatty. “I’m bad at these questions,” she offered in defense.

“It’s sad how there aren’t a lot of female designers,” said Tanya Taylor inside cocktails. “There are more coming up, which is awesome, but there’s definitely room for growth.”

The Canadian designer attended with Olivia Munn, who highlighted the affordability of Taylor’s designs as making her a champion for women.

“I think especially in this economy, when a lot of people don’t have a lot of money to spend on fashion, [it’s great] that you can buy something that’s so versatile and feminine and makes you feel really good when you put it on,” Munn said.

“That’s a large question, during cocktail hour!” Vera Wang said, making a beeline for the theater’s doors, when asked if she felt there was equal representation of women in the industry. “I think there are never enough.”

“You know what? I think we should do more to support the country right now,” said Stan Herman, celebrating his 36th year at the event. “I’m not interested in supporting female designers, I think we have other more important issues right now. I think women are doing their thing properly. It wasn’t the case years ago when we started — we didn’t have too many female designers.”

Honoree Steinem agreed. “I remember the days when there really weren’t [female designers],” she said. “We were the objects but we did not profit from what we wore at all, nor did we control it. It’s not perfect, but it’s changed a lot. This award is symbolic of a whole movement of change.”

As for the female designer she had chosen for the big night? “Actually, I have on Michael Kors.”