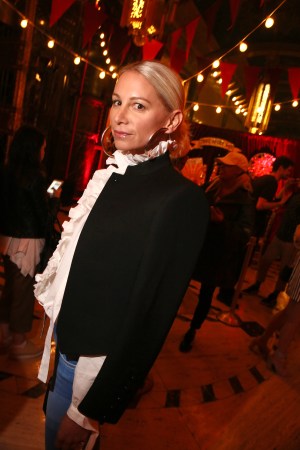 The CFDA awards may no longer be televised, but that doesn’t mean the awards show is without hype. Leading up to the ceremony, which will take place June 6, this time at Hammerstein Ballroom, the nominees for the Swarovski prize for emerging talent gathered Wednesday evening for libations in the lobby hallway of 100 Barclay in Manhattan to unveil their pennants created with the famed crystals.

The cocktail had a carnival theme, meaning the pennants were displayed spinning around a pinwheel at the end of the hall. “They’re varsity pennants, which led me to think about ‘Dazed and Confused,’ just sort of a trippy Seventies vibes,” James said of her pennant design. While some tried to downplay the crystal factor, James felt right at home working them into her pennant. “I wanted crystals and flowers,” she said. “I also have a lot of crystals in my house for energy. I have a lot from Africa. My mom is super into crystals, so I grew up with that. She always gives me a lot of crystals.”

“In thinking about my brand and about creating a moment that felt really intuitively ‘Ryan Roche,’ I just immediately thought of texture,” Roche said. “I had this beautiful bundle of horse hair that my mom had bought me in New Mexico, and it’s been sitting in my office for two years, and it was just the perfect color [for the pennant]. It was just this really organic process.”

“It has a flap that unveils the silver side — we had a pant in our collection for fall that had a silver sequin embroidered lining, so it’s an homage to that,” Garcia said. “And it has our logo inscribed on it in black, so it’s very subtle — as subtle as Swarovski can provide.”

Burris was not only behind one of the pennants, but also created the headdresses worn by the likes of DJ May Kwok. “They both incorporate crystals and feathers, which is something that is very on brand for us,” she said.

As for the upcoming awards showdown, the competitiveness seemed to be tame. “We’re all such a close-knit group of people, that I know it sounds so crazy but literally I’m going to be happy for anyone who wins,” James said. “Getting to know my fellow nominees, those moments are so amazing.”

Roche echoed, “We all support each other so much.”