The CFDA, Vogue and Amazon Screen Season Premiere of ‘The Fashion Fund’

Finalists for the 2015 CFDA/Vogue Fashion Fund gathered at the Morgan Library and Museum for the premiere episode of "The Fashion Fund." 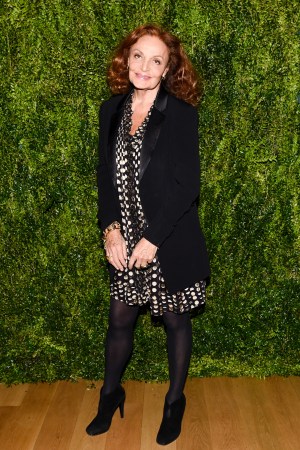 Finalists for the 2015 CFDA/Vogue Fashion Fund gathered at the Morgan Library and Museum Thursday night to screen the premiere episode of Amazon’s unscripted series “The Fashion Fund.” Now in its third season, the series follows designers through the fund’s selection process and competition. Among the finalists were Scott Studenberg and John Targon of Baja East; Thaddeus O’Neil; David Hart; Becca McCharen of Chromat; Chris Gelinas of CG Studio; Raul Arevalo and Brad Schmidt of Cadet, and Matt Baldwin, and winners Aurora James of Brother Vellies, Jonathan Simkhai and Rio Uribe of Gypsy Sport.

“To be a finalist of the CFDA/Vogue Fashion Fund is to be given wings to fly in this very competitive fashion world,” the chairman of the Council of Fashion Designers of America, Diane von Furstenberg, told the audience.

Amazon purchased the series from Condé Nast Entertainment last year. “And for the first time, it’s not just the episode of the fashion fund that you can watch on Amazon, but you can also shop their collections on the site starting on Feb. 25,” von Furstenberg said. “Another way to help these young creators.

“Each year it is so rewarding to see the 10 talented designers build a sense of community, which all Fashion Fund alumni — a lot of them are here tonight — can attest to,” von Furstenberg continued. Case in point, the group giggled lovingly when the episode cut to an emotional James breaking down upon learning she was a finalist.

The CFDA/Vogue Fashion Fund, founded in 2003, most recently awarded Paul Andrew, Public School and The Elder Statesman with the top prize. Brother Vellies, Gypsy Sport and Jonathan Simkhai were named the three winners for 2015 this past November.

“All of us at Vogue and the CFDA are delighted that we have students from Parsons, FIT, The School of Visual Arts, Pratt and the New York City Tisch School of the Arts with us tonight,” Anna Wintour said. “We are sure that one day Diane and I will be announcing your names at some future Fashion Fund event.” To which one such student in the audience told her seatmate, “That was flawless.”