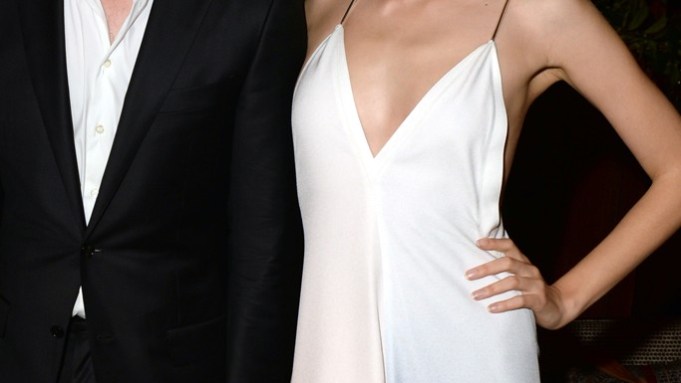 NEW YORK — “I have to work up to muse status. I am just a one-night stand,” exclaimed Lily Donaldson, on the arm of Wes Gordon at The Ludlow hotel Tuesday night. The occasion: to celebrate the fruits of the CFDA/Vogue Fashion Fund Design Challenge, this year sponsored by Maybelline New York.

There was a reason the model wasn’t the muse on this occasion. Each of the 10 fashion-fund finalists had been assigned a city as the key sartorial guide, and Gordon’s was Miami. “So I chose Michelle Pfeiffer in ‘Scarface,’” he said of the white airbrushed crepe dress on Donaldson, who so perfectly channeled the iconic movie character that one had to wonder if maybe she’s born with it (pun intended).

Creating within the perimeters of a specific design task can prove a challenge, though this year’s crop of finalists delivered some impressive ideas. Eva Zuckerman of Eva Fehren was assigned New Orleans, and after a trip to The Big Easy, she made rings and earrings as well as a Mardi Gras mask using stones that change colors depending on the light. She even brought two flashlights to prove the point. “See how they turn bright green,” the designer marveled at a purple alexandrite stone set in an earring.

The three Orley designers had a familiar city to play with: Detroit, where Matthew Orley and Alex Orley hail from, “and my honorary hometown,” said Samantha Orley, who is married to Matthew. “We wanted to focus on the golden era of Detroit, with the sheen of a classic car and the soul of the Motown sound.” Orley’s first women’s look accomplished this through a knit twinset teamed with a double-faced cashmere skirt embellished with more than 1,500 Swarovski crystals. The opera gloves and hand-smocked suede clutch added to the Diana Ross vibe.

As Julia Murphree, an assistant vice president at Maybelline New York, put it, “It lets designers take their inspiration into a place that speaks to beauty in different places in America.”