As keynote speaker, Ford’s words of wisdom ranged from pragmatic and insightful to amusing and, in true Tom style, a little provocative and even risqué. 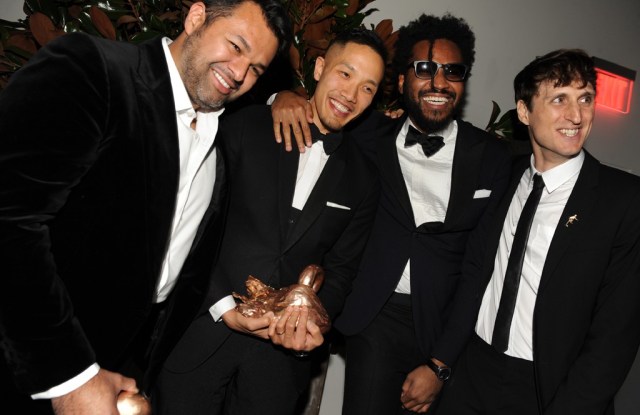 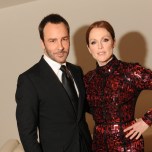 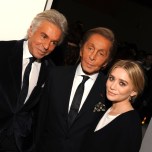 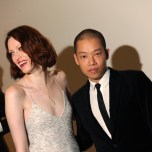 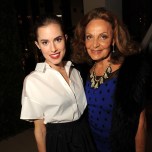 “Trust your instincts when it comes to design.”

Tom Ford could have written those words out on note cards and handed them out to all the attendees at Monday night’s CFDA/Vogue Fashion Fund dinner, where his keynote address was filled with such pithy advice to designers young and not so young. Ford’s words of wisdom ranged from pragmatic and insightful to amusing and, in true Tom style, a little provocative and even risqué.

“Never sell a controlling interest in your name,” the designer told the crowd at New York’s Spring Studios, which included the night’s winners, Public School’s Dao-Yi Chow and Maxwell Osborne, and runners-up Marc Alary and Juan Carlos Obando, as well as the other finalists for the fund, which marked its 10th anniversary this year. “Ever. Ever,” Ford said, punctuating his point. “A few million now will seem like a lot to you, but one day, when you are the success you know you can be, you will regret this.”

More specifically, he said it was important to pick the right partners to help you grow the business.

“If you’re ever in talks with a potential investor or financial backer, and they bring in their wife’s blouse to show you for inspiration, run,” Ford said. “If a potential investor has a wife or daughter who just loves fashion and can’t wait to come in and talk to you about the collection, run. If your president or chief executive officer thinks they know the difference between dark burgundy and aubergine, fire them. My point is, if your brand is to have a strong identity, it must come from you.”

Ford made the latter point on several occasions in his extensive remarks, often demonstrating a surprising sense of self-awareness and welcome self-deprecation — a side of the designer that is perhaps lesser known to the general public.

“If you’re designing your own label, then know yourself,” Ford noted. “If you become well-known as a designer, you give the world your taste. What you create will carry your distinct personality. No matter what I do as a designer, I will always be pegged as the sexy designer who always does black. Miuccia [Prada] is the intelligent designer. Yves [Saint Laurent] was the delicate suffering designer, and so on.”

Fashion is not all roses — far from it, he was keen to stress. In fact, Ford lamented its breakneck pace, something that has only been accelerated since he started his own label.

“We have to design and produce on a rigorous schedule,” he said. “We have to have genius creative thoughts precisely four times a year and on exact dates. I actually write them on my calendar. I write, ‘Friday, Nov. 8. Three o’clock. Have a genius creative idea.’ There is no other industry in the world that is like this, that is so demanding and expects so much of its talent. And god forbid those genius creative thoughts don’t happen for a few seasons, then you get to read about how you’re slipping, how the momentum is over, how you have lost it.”

“He’s so handsome, it doesn’t even matter what he says,” swooned Allison Williams.

It still does to some, apparently. “He just terrified me by telling me one story he is going to mention tonight,” Anna Wintour said at the beginning of the night. “It’s to do with a beach in St. Barth’s, that’s all I am going to say.”

Said story was about a nude beach Ford and partner Richard Buckley used to frequent in the early Nineties in the early days of the designer’s meteoric career. Wintour had rented a house at the other end of the beach.

“I had a better body then,” Ford recalled. “I was always naked and used to walk up and down the beach with Richard, and every now and then we’d see Anna walk by. She’d always come over and we’d say hi, and one day she said, ‘Hello Tom.’ I said, ‘Oh my god, Anna Wintour knows who I am.’ We talked for a while, and as we’re about to say goodbye, I leaned in to kiss her, and I realized I am absolutely naked. It was like one of those dreams in high school when you go to school and you’re naked and everyone else has clothes on, except this was real.” He pulled back, the kiss didn’t happen and the duo walked away. “It was the last time I was naked on a public beach, and I bet none of you have been naked and had a conversation with Anna Wintour. Well, Shelby [Bryant, Wintour’s companion]…at least I hope Shelby.”

Ford wasn’t the only one with surprises up his sleeve. Just before the winners and runners-up were revealed, Baz Luhrmann took to the podium — having zipped down to TriBeCa from Glamour’s Women of the Year event midtown, where wife Catherine Martin was honored — to toast Wintour for her 25 years at Vogue. It came replete with a video he directed that featured the likes of Harvey Weinstein, Nicole Kidman, Oscar de la Renta and Michael Kors. They shared several anecdotes about Vogue’s editor in chief, though outgoing Mayor Michael Bloomberg possibly presented the picture of Wintour best. In one clip, he donned her signature shades. And they all had clothes on.