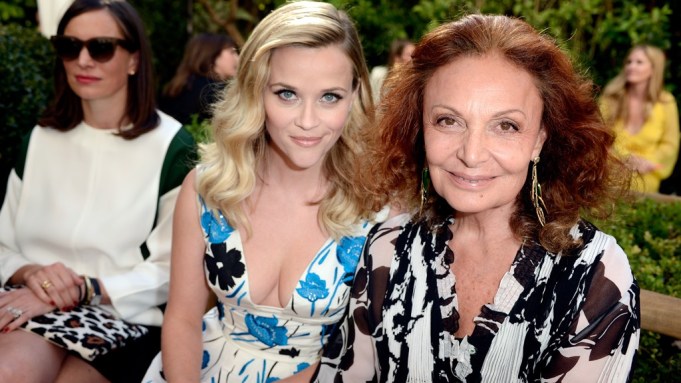 The CFDA/Vogue Fashion Fund finalists took their show on the road for their annual Los Angeles runway presentation at the Chateau Marmont. On Tuesday, Diane von Furstenberg started the event with a tribute to Oscar de la Renta — co-host Reese Witherspoon honored the late designer by wearing one of his designs, a hand-painted silk faille dress — and later the CFDA chairman segued into a celebration of fashion. Anna Wintour missed the event this year in part because of her travel schedule and de la Renta’s death.

“I got to meet Lou Doillon and Milla Jovovich. Milla was one of my first fans when I did my kids’ brand. We’ve had a relationship over e-mail for six years and today was the first day we’ve actually met,” said Roche of the eight-months-pregnant actress. Tanya Taylor was tickled to see actress Gillian Jacobs in a printed dress that matched the one she had chosen to wear herself. “She’s so happy about fashion. She posts pictures, she’s actively engaging designers, it’s cool. And I’m a huge ‘Scandal’ fan and those ladies look so adorable,” she said of Katie Lowes and Bellamy Young. “Being in New York we normally get a press release when someone wears our clothes, but it’s so different being here and hearing from them.”

Witherspoon was by far the biggest fashion fan there and she said she actually chose her de la Renta frock a week ago. “It is sort of poetic that today we’re talking about Oscar and honoring him,” she said, before adding, “It’s so great be here and catch up with friends I haven’t seen in so long. It’s like fashion is half of my life. The other half is movies.”

Of her busy Hollywood season with a starring role in “Wild” and producing the hit “Gone Girl,” she said, “I didn’t expect all these movies to be coming out at once. Diane was so supportive and helpful; she just said to me, ‘I hope you feel empowered,’ and I said, ‘Well, I feel empowered when you say it to me.’”

Afterward, at her home in Beverly Hills, von Furstenberg hosted a dinner for a select crowd that continued partying much later at On The Rox, at an unofficial after party hosted by Greg Chait, the 2012 prizewinner for his label The Elder Statesman. Jenna Lyons, Erin Wasson, Cassandra Grey, Tallulah Willis, Cody Horn, Steven Kolb and most of the finalists were there as well as singer Shingai Shoniwa in a bold dress and headpiece.

“See?” said Chait pointing to the dance floor at around 1 a.m. “Now I’m having fun.”