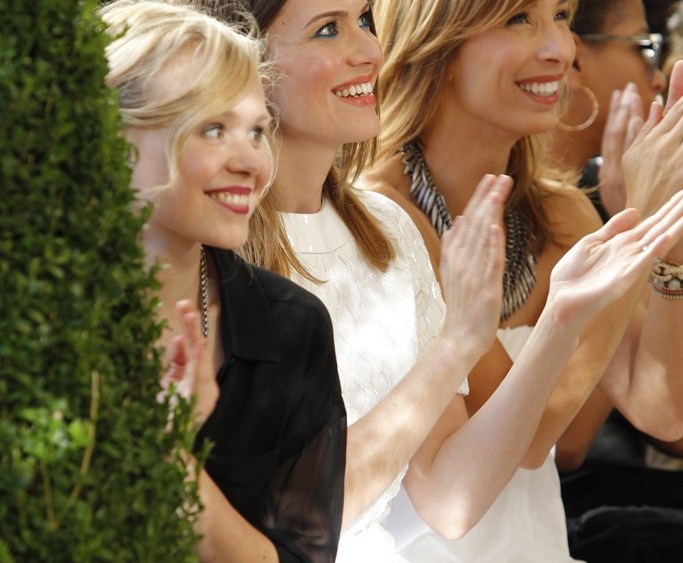 A Hollywood campaign visit by Michelle Obama may have been causing a traffic snarl on the Sunset Strip on Thursday, but at Chateau Marmont, a slightly lower-stakes contest was happening at the annual CFDA/Vogue Fashion Fund Los Angeles runway show.

This year’s finalists — A.L.C., Assembly New York, Giulietta, Illesteva, Jennifer Fisher, Jennifer Meyer, Suno, Tabitha Simmons, The Elder Statesman and Wes Gordon — were all starry-eyed from the experience of being in Los Angeles and showing their clothes to a slew of stars that included January Jones, Elisabeth Moss, Marisa Tomei, Emma Roberts and Mandy Moore.

Perhaps the exception among the nominees was Meyer, who grew up in Hollywood and whose front-row cheering section included her father, NBC/Universal chief Ron Meyer, husband Tobey Maguire, Isla Fisher, Jennifer Aniston and producer Joel Silver. A few seats down, next to Anna Wintour and Victoria Beckham, was director Baz Luhrmann, whose upcoming “The Great Gatsby” stars Maguire and Fisher alongside Leonardo DiCaprio and Carey Mulligan.

“Are you going to make a movie about this?” one guest asked him. “Well, I think I already did, or at least it’s inspired many characters,” said Luhrmann of the fashion show. “Anyway, there’s nothing more pleasurable than sitting in a beautiful garden watching gorgeous clothes go by.”

Many of the guests had their own agendas as well, whether it was deal-making, industry schmoozing, or strictly clothes-related.

“I always get ideas for the red carpet here,” said veteran Emmy nominee Moss. “I actually need to meet designers who want me to wear their clothes. It’s how I started wearing Cushnie et Ochs, who showed here last year.”

For company, Moss brought along her Stella McCartney-clad mother, Linda, who helped her spot the designers in the crowd. Another actress stalking the fashion talent was Bella Heathcote, who jumped up from the miniature table where she was taking postshow tea with friends Mary Elizabeth Winstead and Amanda Crew to bound up the parlor stairs to meet Andrea Lieberman. “A.L.C. is one of my favorite lines,” she told the stylist-turned-designer.

Gwen Stefani, one of Lieberman’s former clients and a close friend, made a postshow appearance to congratulate her. Wes Gordon had a fan in Katy Perry, who had several people sweating when she missed the show but came in time for the photo op wearing one of his printed dresses.