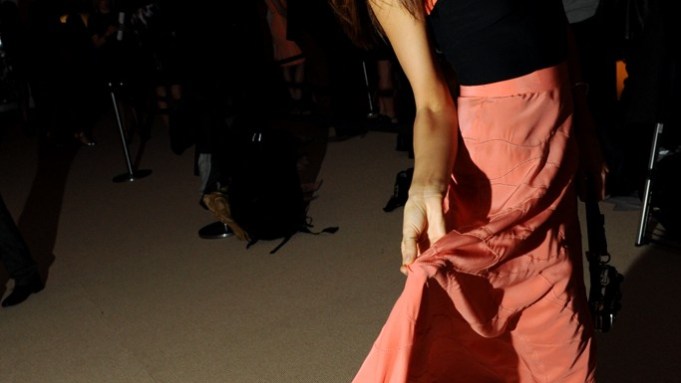 NEW YORK — Some things change, others stay the same.

Even though Tuesday’s CFDA/Vogue Fashion Fund gala took place in a different venue (Center548), the night’s culinary tradition of chicken pot pie continued — much to the delight of quite a few in the crowd. “I haven’t had it in at least 10 years,” squeaked Dakota Fanning. “I am so excited.”

With plates cleared, it was time for the actual awards presentation, and Greg Chait of The Elder Statesman took home the top prize, while Jennifer Meyer Maguire of Jennifer Meyer and Tabitha Simmons were the runners-up.

“We would work very, very late, as anyone here that works or worked for or with Donna knows. At 3 a.m., the masseur was coming around to give a massage. That’s weird. And at 4 a.m., we’d all sit in a little circle and we’d chant over the fabrics. That was weird to me. And then, at 5, Demi Moore would come in for a fitting.” But, he stressed, “I completely adore Donna. I adore her integrity, I adore the world that she has created and so passionately believes in.”

Not to be outshone in unusual ways is Tom Ford, for whom Bailey worked at Gucci next. “I go into these offices, and basically, there is just a huge room,” he recalled of his first encounter with Ford. “It’s quite dark and in the middle of the room were two chairs. On one of the chairs, there is this chap who sat there, shirt open to his navel, with a huge gold belt.”

His audience, which also included designers like Vera Wang, Tommy Hilfiger, Joseph Altuzarra, Jason Wu, Alexander Wang, Derek Lam, Carolina Herrera and Reed Krakoff, loved it. “Christopher’s speech,” said Emma Stone of her favorite part of the night before rushing off to a photo call with Anna Wintour, Diane von Furstenberg, Steven Kolb and the night’s three prize winners, each brimming with excitement at their honor. “I grabbed my husband’s hand to feel this isn’t a dream but actually happening,” Meyer Maguire said.

Hubby Tobey Maguire had no qualms about being the “plus-one” on this occasion. “Its cool, it’s a party,” he said.

In his acceptance speech, Chait dedicated the award to his brother Paul, who died in 2004, and thanked his team and his family, including fiancée Laura Ramsey. “I feel outrageous and really, really good,” he said afterwards. “I am going to call my family. And then celebrate.”