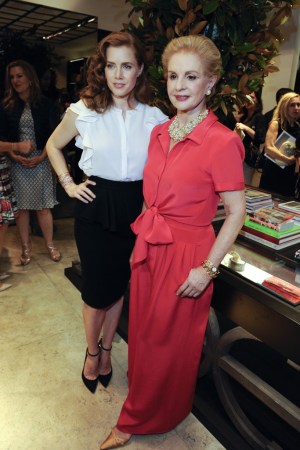 Rivera, Accola and Graham anxiously gathered around Herrera. A nervous Graham prepped herself for the encounter. “I have to wipe the [sweat] off my forehead. I’m going to turn into a rotisserie chicken,” she said. Accola and Shipka were quickly turning into enthusiasts. Accola said, “Being an actress starting off in your early 20s, you don’t necessarily jump straight to shopping at Carolina Herrera, but what I love is all of her pieces are so classic and timeless. I’m a very big fan of vintage already, and I appreciate really structured, but graceful vintage cuts, and that’s what her line embodies.”

Although she’s old hat by Hollywood standards on the fashion scene, Adams isn’t jaded about fashion. “Being 5-foot-4 with an athletic build, I can’t wear everything that goes down the runway. Do I still watch everything that comes down the runway? Yes, I’m still inspired by the artistry,” she said. Taking a look at Adams and the other actresses wearing CH Carolina Herrera in the brand’s store — the 99th worldwide — Herrera was clearly pleased. “All these young girls wearing CH look fantastic,” she said.