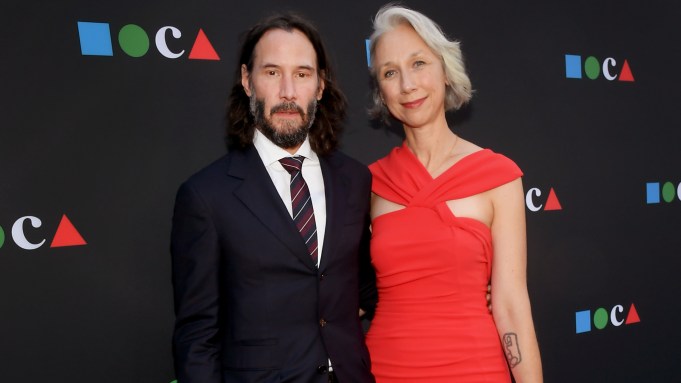 “I don’t have a suit on right now, because I’m an artist,” proclaimed Chance the Rapper on stage at the Museum of Contemporary Art’s 2022 gala in Los Angeles.

He opted for a Burberry sweatshirt, Champion trousers and his signature “3” baseball cap.

“But then I heard the one and only Keanu Reeves was in the house tonight,” he continued. “I was like, ‘Man, I should have worn a suit.’”

The actor — in a navy suit — was in the audience with his girlfriend, artist Alexandra Grant.

“I just want to say, I would love a picture of Keanu Reeves,” added the rapper, the evening’s performer.

The crowd roared in applause as Reeves made his way to Chance (born Chancelor Bennett). The two posed for a photograph, each flashing a peace sign.

“Hey, make some noise for Keanu Reeves,” he squealed, as Reeves returned to his seat. “Dreams do come true.”

After a three-year hiatus, MOCA’s annual benefit was back, raising more than $2.9 million this year for the museum at The Geffen Contemporary in L.A.’s Little Tokyo — one of three MOCA branches. Founded by artists in 1979, the establishment is dedicated to collecting and exhibiting contemporary art.

“For 12 months after COVID-19, we were open exactly zero days,” said Maria Seferian, MOCA’s chairwoman. “We are now back to full-time operation. I cannot think of a better way to celebrate and honor everyone that’s made it possible for MOCA to remain independent and strong during this time than Pipilotti [Rist].”

The Swiss visual artist’s latest exhibit, “Pipilotti Rist: Big Heartedness, Be My Neighbor,” has been on view at the museum since September 2021. Spanning more than 30 years of her work, the interactive installations explore “relationships of video and the body; exterior environments and interior psychological landscapes, and reason and instinct,” according to the artist. The event marked its closing weekend.

“That’s how it looks,” said Rist, after dropping to the floor and crawling her way to the microphone stand. “It took me 60 years to be here, to be in front of the best crowd I could imagine.” (She turns 60 on June 21.)

“Tonight, we are one family, and this is now our collective dining room,” said Rist, before instructing everyone to hum. Yes, hum.

“I need your help,” she went on. “It’s a long wish I have deep inside that we, together, that we would hum. Everyone would hum in their particular, personal tone. It’s not about beauty. It’s not that it has to sound nice. It’s even better if we are disharmonic. Then, we will have stronger sound in the room, and then the ceiling will lift.”

The diners giggled before complying. Coming together in sound, it became a performance: Rist’s “Humming Neighbors.”

“We are becoming humming neighbors,” she said.