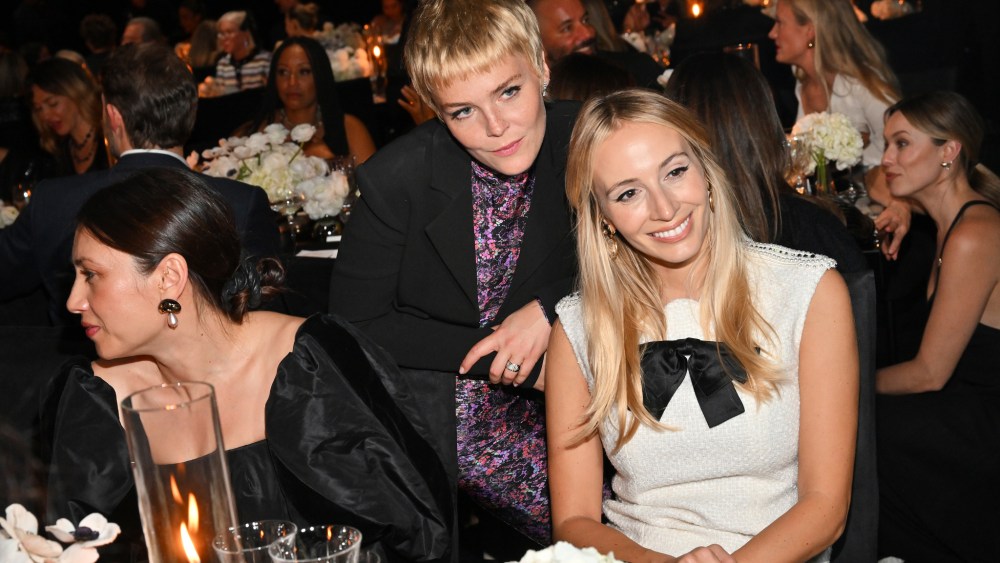 Chanel brought the sun, the moon and a whole lot of stars out in Los Angeles on Thursday night.

Indeed, it was like walking into outer space entering the dark rooms, designed to mimic Chanel’s apartment with Paris street signs, hopscotch game, bistro tables and photos of Coco hovering over cases full of sparkling diamonds.

House muse Marion Cotillard wore the collection’s “Comete” brooch, bracelet and ring, which she twirled around her finger, explaining how she sets intensions for each piece of jewelry, attaching a sentiment to remember.

“All the clothes were vintage and so beautiful,” she said of Michael O’Connor’s costume work. “Kate Winslet has carried this project for six years and she’s gathered passionate people and is passionate about Lee, who was such an amazing woman.”

Cotillard will be spending a lot more time in L.A. now that she has bought a 1930s house in Los Feliz. “I fell in love 10 years ago and knew one day it would be my place,” she said of her recent purchase.

L.A. native Greta Lee, of “Russian Doll” and “The Morning Show,” also recently moved from New York back to her hometown. “I keep looking for the subway,” she joked.

Lee has been working hard to bring Cathy Park Hong’s book “Minor Feelings: An Asian American Reckoning” to screen, and said there would be official news on the project soon. “We want to take our time to make sure we do it justice,” she explained, before nodding to the evening’s host. “The women in my family are big Chanel-ers!”

Maggie Rogers arrived in a Chanel jersey top and leggings.

“To be able to wear this snakeskin catsuit and also feel so dignified, is only something that could happen at Chanel,” she said of her look and “Comete” jewelry. “I’ve always looked to the stars for a sense of something greater than us. In creativity, you’re always looking to connect with the sense of potential. And when I look to the stars I sense potential,” added the singer and Harvard Divinity School graduate, who just unveiled her “Feral Joy Tour.”

Among the several rooms used for the evening’s set there was a “planetarium,” encircled with jewelry cases displaying the 77 pieces in the jewelry collection, including the stunning Allure Céleste necklace, with an oval cut sapphire totaling 55.55 carats.

The pieces pay tribute to Chanel’s vision of being the first to create a collection of high fashion jewelry, explained Patrice Leguéreau, director of the Chanel Fine Jewelry Creation Studio.

“She wasn’t welcomed because that world was driven by men,” he said of the first-of-its-kind collection, as opposed to the stones and custom pieces approach to jewelry, adding that the Chanel originals were supposed to travel but did not because of the outbreak of the war. “I kept the spirit and the style, the flexibility and the energy,” he said of redesigning the pieces, many of which are transformable. (Shopping was already in progress, and Chanel was due to restage the event on Friday night for clients.)

Chanel’s relationship to Hollywood stretches back to 1931, when the designer was invited by Samuel Goldwyn to create costumes for his United Artists studio. She designed three films, then left town without anything positive to say about the experience.

Nevertheless, the allure of the brand has remained, even with the youngest stars at Thursday’s event, who held tight their memories of Chanel.

“The first memory is my grandmother wearing Chanel No.5 and the second is my wonderful father [French film composer Alexandre Desplat] did the music for ‘Coco before Chanel,’ so I was exposed to the film in 2009,” said Antonia Desplat, who is starring in Apple TV’s “Shantaram.” “Seeing how Gabrielle threw away the corset, and allowed women to wear easier clothes was very inspiring to my teenage self.”

The crowd mingled with the jewelry, sipping Champagne and vespers before heading into the twinkling dining room.

“Who knew baby’s breath could be so chic?” said costume designer Arianne Phillips of the cloud-like floral arrangements hovering overhead.

The evening ended with a performance by the Yeah Yeah Yeahs under a cutout crescent moon.

“I can’t think of a better way to celebrate Chanel’s high jewelry collection than by introducing a punk rock band,” said Phoebe Bridgers, welcoming her friends to the stage.

Karen O led her band with high-flying spirit, while Rogers, for one, barely contained herself in her seat.

Finally, when she dedicated a song to Bridgers and “the other rockers” out there, the dancing broke out.

“Raise your hands if you like diamonds!” Karen O shouted as Rogers, Kaitlyn Dever and others jumped up and started some high-class moshing.