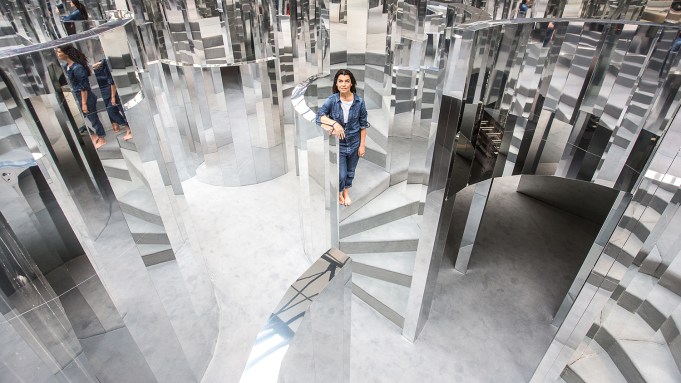 GETTING LOST: As far as fashion party locations go, Peckham is an odd one. In New York terms, it’s probably best understood as a bit like Hell’s Kitchen circa 1995 — in the process of gentrification but still very much on the gritty side of things.

And it’s where Chanel and i-D chose to celebrate the launch of The Fifth Sense, a new online platform from the Vice Media-owned magazine that celebrates women in creative industries with video and editorial content, and “hero” projects from women across a range of disciplines, each inspired by Chanel’s fragrances.

Mademoiselle Chanel might well have been turning in her grave at the fried food served on steel Aperol-branded trays, and probably would have been none too thrilled with the proximity of the windowless squats to the warehouse location, but she would have likely been very impressed with the vertigo-inducing installation by set designer Es Devlin, commissioned as the premiere hero project in the series.

Stage designer Devlin, who has created sets for everyone from Kanye and Jay Z to Lady Gaga, Take That and Rihanna, and has worked across theater, opera, dance, film and fashion, was inspired by the staircase at Chanel’s Rue Cambon apartment for the “Mirror Maze” installation, a discombobulated series of four rooms, created in response to fragrance and its power to recall memories, times and places.

The first room featured a digital projection that uses immersive graphics and a fly-through sequence to convincingly invoke a sensation of physically falling, which was created by Devlin’s longtime visuals collaborator Luke Halls. The next room was an elaborate maze of curved mirrored walls and was just as disorienting.

The experience was fragranced with a scent of ylang ylang, neroli and jasmine exclusively created by Chanel perfumer Olivier Polge, which can only be experienced as part of the installation.

Guests including Nicholas Kirkwood, Tiger-Lily Hutchence and Nick Grimshaw got lost in the maze, emerging to cocktails and music played by DJ Hanna Hanra. “I was making a request; telling her to play hip-hop,” said Jack Guinness on his way to the crowded bar. “Hip-hop is always the best thing to play. But she said she feels too shy to play it yet. It’s never too soon.”

Lottie Moss, making her rounds of the night’s parties, popped in and shared an interesting fascination with sloths. “I have a really big obsession with sloths. I just like everything about them; I follow pages on Instagram about them. I really want to do some charity stuff with sloths, because they can die really easily,” she said. “Sometimes they mistake their arms for branches so when they try to climb they fall and die. It also takes them, like, 24 hours to go down the tree and pee. So they have to go down the tree, it takes them so long, and sometimes when they’re down there, because they’re not quick enough, other predators go and eat them. It also takes them 48 hours to have sex.”

The “Mirror Maze” installation will be exhibited for five days at Copeland Park in Peckham from Wednesday Sept. 21.