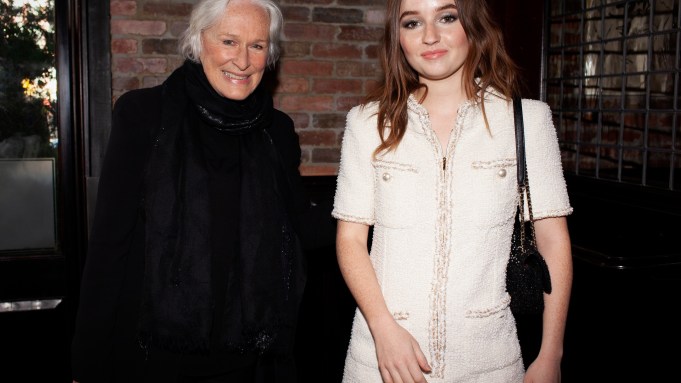 Women in film were celebrated by Chanel and Tribeca Enterprises at Locanda Verde on Monday, where the “Through Her Lens: The Tribeca Chanel Women’s Filmmaker Program” luncheon was held.

Glenn Close snuck past the outside paparazzi with nonchalance and stayed put by the entrance to the restaurant, as starlet after starlet strolled past. Katie Holmes posed for photos but politely declined interviews, hurrying inside. Hailey Gates, Grace Gummer and Dianna Agron chatted by the bar. Eliza Scanlen, Kelsey Asbille and Kristine Froseth held court at a corner power table of “It” girls.

“Being an actress, it’s really nice to be here with a lot of women in film and support each other — and look good while doing it,” Asbille said.

The actress, who just finished filming the third season of “Yellowstone” and is preparing to head to Chicago for her next project — “just in time for winter” — named Andrea Arnold and Zazie Beetz, who was in attendance, as women in the industry she looks up to.

“I love what she did in ‘Joker’ this year,” she said of Beetz.

“I feel very honored to be amongst some of the great legends of women in film, and people who have paved the way for women like me to be part of it, and also women who are coming up,” said Annabelle Attanasio, the young director making waves for the film “Mickey and the Bear,” which stars Camila Morrone.

Her top female-led project for the past year was Olivia Wilde’s “Booksmart.” “I was just with her in Savannah and she is so inspiring,” Attanasio said. “I love someone like her being a voice, whether you want to be a director, writer or editor, she’s really setting an amazing example.”

“‘Hustlers,’ sorry!” Keke Palmer said of her favorite female film from the year. “But in general, it would probably be ‘Eve’s Bayou,’ by Kasi Lemmons. I think she’s — that’s one of my favorite movies of all time, and I think she’s totally underrated.”

And with that, time for lunch.