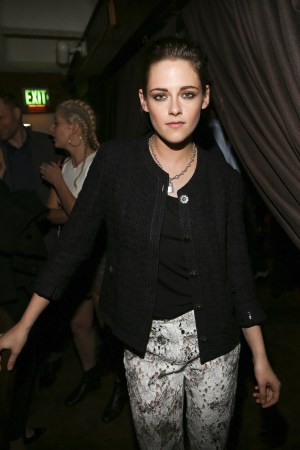 “Now, I just want to warn you, this is a scrim-and-scrum sort of thing, it’s not formal. So I want to apologize in advance if food gets thrown at you or something,” said Charles Finch, by way of greeting Charlotte Rampling as she entered the annual pre-Oscars dinner the branding impressario has hosted with Chanel for the past eight years. Finch was half-joking, although the intimate dinner at the tiny basement-level Italian restaurant Madeo can get quite rowdy.

After descending the stairs (where a mariachi band serenades each year), guests saddle up to the narrow oval-shaped bar, where most of them remain wedged as still others crowd the narrow space.

“Oh, that’s a good notch,” said Dree Hemingway, as a foot of space cleared up. “What do you guys want to drink?” she asked her friends.

There were more pretty young things right next to her in current-season Chanel, including Eve Hewson and Emilia Clarke, who chatted with their stylists, and Dakota Fanning, Ellie Bamber and Stewart, who shared a moment catching up over their latest projects. Soo Joo Park, Soko and the cast of the upcoming film “Mustang” were among the freshest faces in the mix.

“This is my annual ritual, I’d never miss it,” said Collins, who was still a teenager the first time she attended the party, one where most guests indulge in the carb-laden dishes.

Just before the dinner bell (or, in this case, a spatula handle banged against a pan) rang, Pharrell Williams snuck in with his wife Helen Lasichanh.