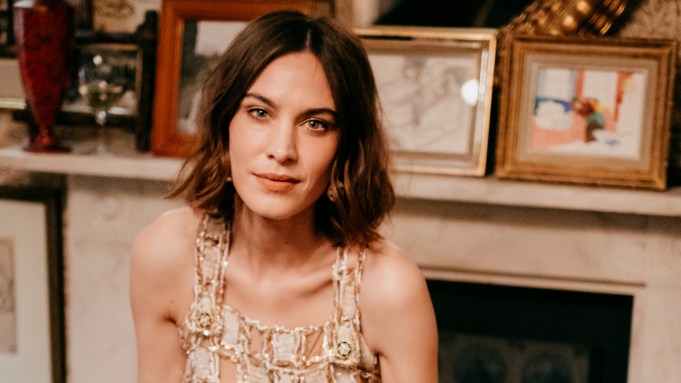 London was in full gridlock on Saturday night: West End theaters were sold out; people crowded outside restaurants and bars hoping for last-minute tables, and Tube trains were packed tight as anchovy tins.

In the midst of it all, the town was prepping for the BAFTA Awards, which took place on Sunday night at Royal Albert Hall. Foremost among the preppers were Charles Finch and Chanel, who were forced to cancel their usual pre-BAFTA party last year due to the pandemic (there was a virtual one instead).

There were no face masks, no COVID-19 testing required, and people hugged when they saw each other — just like the old days. The mood was ebullient as guests flowed from room to room, huddling over Champagne and cocktails in the cozy, art-filled rooms, or sinking onto the plump sofas for a proper catch-up after so long in lockdown.

The joy — about working, traveling and socializing again — was palpable, and the creativity was in full flow.

On Monday, Sandy Powell is set to start work on Disney’s “Snow White,” and while she couldn’t offer up many details per her NDA, she confirmed the seven dwarfs won’t be mining for diamonds. “They’ll be looking for colored gemstones instead,” said Powell, “and not necessarily precious ones. No diamonds here.”

In the next-door room, Emerald Fennell was aglow with gems of various sizes and colors, courtesy of her father Theo Fennell, one of Britain’s best-known jewelers. She was wearing a green opal ring and a necklace made from pearls as fat as cherries.

“There’s nothing like a big, chunky pearl,” said the actress, filmmaker and writer who picked up BAFTA and Academy Awards last year for “Promising Young Woman,” which she wrote and directed.

Fennell, who also appeared in “The Crown” as a young Camilla Parker-Bowles, said she writes every single day, no matter what. “Writing is portable, and that’s so important when you have children,” said the mother-of-two (and Oxford grad), adding that she’s working on a variety of projects and plans to continue acting, writing, and making films until people tire of her.

It’s unlikely that will happen.

Fennell wasn’t the only guest with wordy projects on the go: Walliams, the comedic actor-turned-children’s-novelist who’s penned books such as “Gangsta Granny,” “Billionaire Boy” and “Grandpa’s Great Escape,” said he’s been spending his days adapting his novels to the small and large screens — and there are more books to come, too.

“That’s for sure, I’m under contract with the publisher,” he joked.

Finch, the evening’s co-host, is also getting into publishing: Later this year the serial entrepreneur and film industry fixture plans to launch a digital magazine called “A Rabbit’s Foot.” It will be focused, he said, on film, culture, and the arts.

And like a rabbit’s foot, “you keep it in your pocket, and it brings good luck,” said Finch, before escorting his cultured crowd to dinner downstairs.