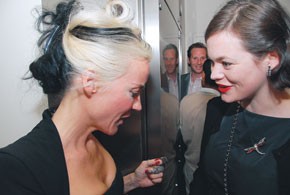 In the middle of a steamy and bustling Manhattan, Bulgari threw a relaxed garden party at the Elizabeth Street Gallery Wednesday night to introduce its Jasmin Noir fragrance. As a peppy jazz trio played and the scent of fresh gardenias wafted through the air, guests including Ann Dexter-Jones, Allison Sarofim, Eva Jeanbart-Lorenzotti, Lisa Airan and Gucci Westman discussed summer plans. (Apparently, Saint-Tropez is still the gold standard and everyone who’s anyone will be there in late July and early August.)

But Arianna Huffington, who was hopping a plane back to Los Angeles the next morning, couldn’t shake off work, asking various partygoers to be guest bloggers on the Huffington Post.

The night before in London, Chanel launched an “ephemeral boutique” in the Dover Street Market, in which to showcase its Metiers d’Arts Paris-Londres collection. The fashion house brought a few elements of the French capital to the store, including giant cutout figures of Karl Lagerfeld, a dressing room painted to look like quilted leather and mannequins done up with giant beehives and winged eyeliner, like the models in the Paris-Londres show.

Loree Rodkin, Ronnie Sassoon, Amanda Harlech, Daphne and Jasmine Guinness, Astrid Muñoz and Saffron Aldridge sipped Champagne as they scurried between floors of the six-story boutique. Pieces from the collection were scattered throughout the store, and will be sold there through June, alongside quilted Union Jack purses.

The ubiquitous duo Agyness Deyn and Henry Holland took to the decks for the evening to spin what Deyn called a “mismatch” of tracks, from Dolly Parton’s “Jolene” to Madonna’s Eighties hits.

Stephen Jones, meanwhile, marveled at the giant black and gold Chanel clothes hangers that formed part of the installation, while he sampled some of the label’s fragrances on display. “I’ve got a stall upstairs that Chanel has taken over,” he said. “I think I’ll ask them for perfume as rental.”