Chanel threw an after party after their cruise 2017 show in Havana. 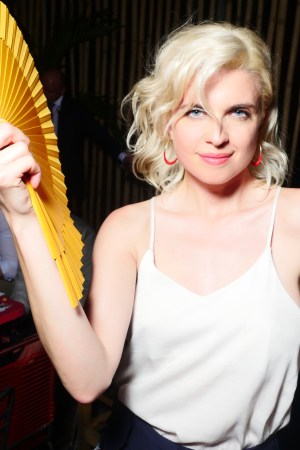 After pouring his love of Latin music into Chanel’s cruise collection, Karl Lagerfeld demonstrated it again at the after party at the Plaza de la Catedral.

Dressed in a sequined jacket by his designer buddy Hedi Slimane, the designer tore up the dance floor with Cécile Cassel, demonstrating why he was once a champion of tango and cha-cha. Cassel was one of the rare VIP guests who had been to Cuba before, having made it a side trip during a recent vacation in Trinidad. “I will come more often,” she vowed.

The French actress and singer, who performs under the stage name HollySiz, said she is working on her second album, which should be out next year. Dressed in white shirts, which are de rigueur in Havana, Gaspard Ulliel and Tilda Swinton swayed through the packed party, the latter on sculptural cork-heeled platforms from Chanel’s fall couture runway. Cuban singers and drummers yielded to a DJ and more furious beats.

Frozen mojitos flowed freely at the party, for which Chanel had privatized one of the five main squares in Old Havana and constructed a sprawling multilevel bamboo hut appointed with vintage furniture. A fleet of Fifties cars waited outside to whisk guests back to their hotels.