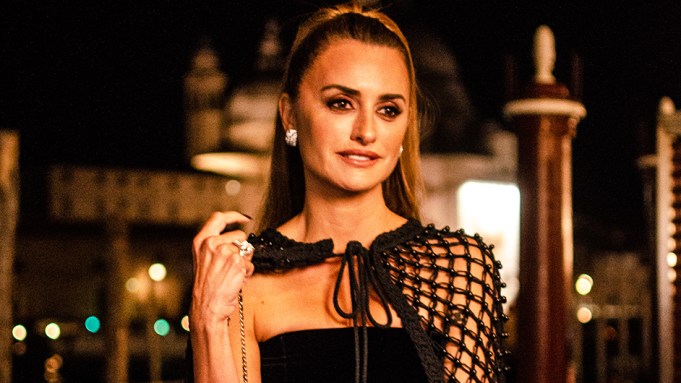 VENICE — “Movies cannot change the world, but they can inspire people to change it,” said Penélope Cruz, highlighting that the film industry has a responsibility toward society.

Cruz and Kristen Stewart, both Chanel ambassadors, were the guests of honor at a dinner the French luxury brand hosted Thursday night at the legendary Harry’s Bar during the 78th Venice Film Festival, which closes on Sept. 11.

The Spanish star is the protagonist of Pedro Almodóvar’s “Parallel Mothers,” which premiered at the festival Wednesday night. Cruz plays Janis, a 40-year-old wealthy fashion photographer who, giving birth to her first child, happens to share her hospital ward with a younger girl, Ana. While Janis is a single woman enthusiastically expecting to become a mother, Ana, played by Milena Smit, is a teenager who is unprepared to enter this new phase of her life. In a roller coaster of emotions, the two manage to become friends in a celebration of female solidarity.

Women’s empowerment and female independence are central themes in the film. “Society is evolving, but in other ways we are stuck. Especially when it comes to gender equality and the role of women in our society, I think that change is happening too slowly,” said Cruz, stressing how movies can have an impact on people’s vision of the world.

Almodóvar adds a political dimension to the film, since Janis is determined to identify the body of her grandfather who, during the Spanish Civil War and Franco’s terror, was buried in an unmarked mass grave.

“I’m very sensitive with this problem of the missing people during the Civil War and I have always wanted to talk about this in one of my films, but previously it felt out of place,” the director said. “But, when I started writing this movie and thinking about the character interpreted by Penélope, I had the feeling that now it was the right time. I finally found the way to give visibility to this issue.…I think Spain has a sort of debt towards these families.”

According to Almodóvar, cinema can be a tool, especially for younger generations to know more about their past. “It seems that the young generations don’t know about our history, they were born in a democracy, they never experienced terror,” he said. “Movies are a very good vehicle to explain to people these kind of tragedies that are still kind of unsolved.”

As a mother herself, Cruz said she’s worried about the relationship that young generations have with technology. “Kids have no chance to get bored today and it’s a pity because when you are young and you get bored, you start being creative and you express yourself at your best,” she said. “I’m kind of strict with my kids when it comes to technology. I’m getting nostalgic of the ’90s, I’m also considering of returning to use one of those old, basic mobile phones that were made just to make calls.”

After the festival, Cruz will film the last part of the Italian movie “L’Immensità,” in which she plays a mother of three in the ’70s. “It’s about a very complicated family, it touches a lot of important things,” said Cruz, who will also dance to the music of the late Italian artist Raffaella Carrà’s. “Since I was five, I have been getting ready for this moment. There is a lot of Raffaella Carrà in my childhood.”

Another mother who was trapped in a marriage and a life that suffocated her was Princess Diana, who is played by Kristen Stewart in “Spencer,” Pablo Larraín’s much anticipated movie that debuts at the festival on Friday. The film, which follows the late princess in a pivotal weekend during the Christmas holidays with the Royal Family in the early ’90s that led to her separation from Prince Charles, is expected to be a global success not only at the cinematic level but also for its fashion quotient.

“It’s funny, I’m not nervous for tomorrow,” admitted Stewart. “You do the best you can, you put the work in and now it’s time to celebrate.”

Due to Diana’s special relationship with the French brand, Stewart is expected to wear a lot of vintage Chanel in the movie. In the official film poster she wears a beige organza evening gown reminiscent of one that was in Chanel’s spring 1988 couture collection. The gown is embellished with gold and silver round, oval and leaf-shaped sequins, which form floral branches. The dress was re-made for “Spencer” in the Chanel atelier and required 1,034 hours of work by five seamstresses.

This is the second vintage Chanel outfit Stewart has worn in previews from “Spencer.” In January, the film released an image of Stewart dressed in a red tweed coat with a tailored collar from Chanel’s fall 1988 ready-to-wear collection, which belongs to the Patrimoine de Chanel collections. Stewart paired the coat with a black veiled hat for a look that was similar to one Diana wore in 1993 during Christmas Day celebrations.

“Diana herself had an intimate relationship with Chanel and this is something we already had in common,” said Stewart. “It’s an interesting thing playing a real person that is so beloved and it’s such an important figure in our society. You want to melt with that person, you don’t want just to do an imitation. The fact that we had Chanel in common helped the process.”

Also at Thursday night’s dinner was French-Romanian actress Anamaria Vartolomei, who is the protagonist of a movie centered on motherhood. Directed by Audrey Diwan, “Happening,” based upon Annie Ernaux’s novel, focuses on the decision of Anne, a young woman living in the ’60s in France, to have an abortion in order to try to finish her studies and escape the established schemes imposed by her working class background.

“It’s super important to still talk about these social issues now, because I believe that women of all ages and social conditions should feel free to decide for themselves and also follow their own vocations,” said Vartolomei.

Other guests included Cynthia Erivo, who is part of the festival jury, and longtime Chanel ambassador Anna Mouglalis, who is also in “Happening,” which debuts at the festival on Tuesday. The French actress is about to start research in Italy for  a documentary on Concetta La Ferla, the woman who in the ’60s established in Caltagirone, close to Catania, the female section of the Communist Party. “I happened to be reading Attanasio’s book about this history and I immediately had the idea of doing the documentary,” Mouglalis said. “Maria Attanasio’s work is incredible since she wants to give visibility to stories that have been neglected because of sexism.”