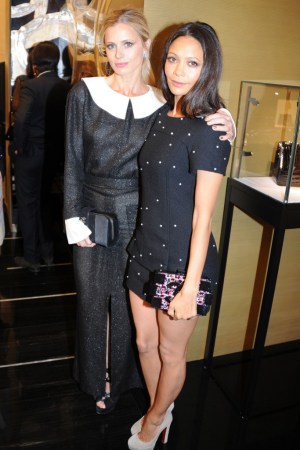 “I’m secretly admiring him from afar,” added Wheeler of the store’s architect, who was decked in his uniform of dark sunglasses and black biker leather. “I thought he was a rock star, but then someone told me who he was. What a brilliant look!”

Marino spent much of his evening squiring guests around the store, which Chanel is billing as the largest and most luxurious of all the brand’s retail outposts.

Marino said there is no doubt the London store out-luxes every other Chanel. “We commissioned 25 works of art — usually when I do a store I get three, four, five works,” he noted.

All of the art in the store was inspired by Chanel icons, including pearls and camellias and pieces of art from Coco Chanel’s Rue Cambon apartment.

“Look at this,” Marino said gesturing to a long hall on the third floor, its walls hung with a series of shiny black paintings by Gregor Hildebrandt, and zero merchandise on display.

“What could be more luxurious in a store than empty space — filled with art? That old retail recipe of ‘sales per square inch’ doesn’t work with me,” he said.