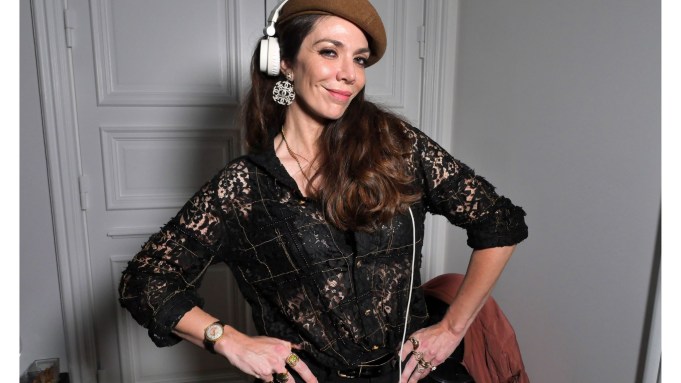 A cosmopolitan crowd decked out in Chanel rolled into the Marais in Paris to celebrate the label’s new Code Coco watch.

A brief trek across cobblestones brought guests to a modern space in an imposing historic building, decorated with photos and screens projecting black and white images of women wearing the new steel and diamond watch.

There was also a new take on the photo booth, with a tablet that snapped pictures in front of a wall of mirrors, delivering the images on cell phones or e-mail. Este, Alana and Danielle Haim, of the rock band, stood tall and ladylike for their first photos before breaking out, in sync, into disco poses.

The sisters just released a music video for their second single and were relaxing in Paris before their upcoming round-the-world tour.

Amandine de la Richardière was also in a cheerful mood, spinning out an upbeat mix of Blondie, Serge Gainsbourg and Boy George tunes from a corner of the room while people snacked on foie gras on thin slices of hazelnut toast, morsels of lobster on fancy chips and vegetable maki rolls.

Alice Dellal was wearing the new watch, a long Chanel skirt, grinders and a vintage biker jacket. She just finished directing a music video for Luis Felber, a longtime friend, who was also visiting from London.

“He’s a really good musician…we’ve known each other for 17 years,” she said.

“If anyone’s gonna tell me what to do, she’s pretty good at it,” Felber chimed in.

Ayami Nakajo, a Japanese actress on her fourth visit to Paris, said she liked how women in the city mixed vintage Chanel clothing with newer pieces and was still glowing about her recent dinner at Le Jules Verne restaurant in the Eiffel Tower: “I like heights. I like airplanes, too,” she said.

Sophie Cookson had seen the Chanel runway show earlier in the day: “Incredible. My first-ever Chanel show, the overwhelming sound of the river, the water,” she said.

Stella Maxwell, who modeled a black dress, clear plastic gloves and shoes in the show, said it felt very special, and described what it was like under the waterfall: “It was windy, it was very windy.” But, thankfully, her hat was not dislodged.