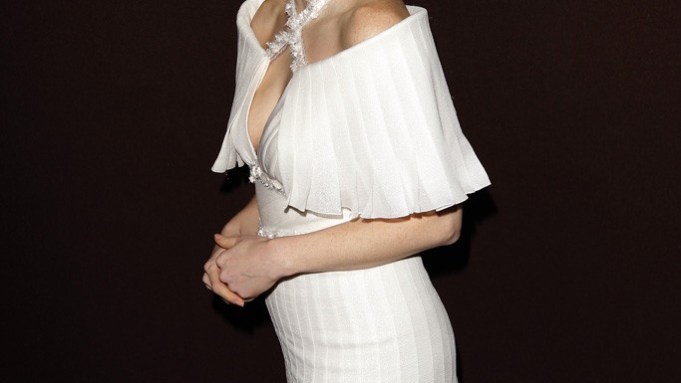 Hollywood is technically on the clock during Oscar weekend, as was very apparent at Charles Finch and Chanel’s annual night-before-the-Oscars dinner at Madeo on Saturday, where guests began to arrive at 7:30 p.m. on the dot.

“It’s all very on time this year,” noted one of the staffers in the iPad-armed, black-clad cavalcade at the door.

“I was like the first person to get here,” said Lily Collins. “It’s an annual thing.” Another youngster who eschewed the “fashionably late” ethos was Chloë Grace Moretz.

“I was so excited to come,” said the 16-year-old. “I love Chanel. They give the best birthday gifts. I remember I got a blue bag for my birthday two years ago, when I was 14. My mom said I wasn’t going to get a Chanel bag until I was 18, so I was freaking out.”

Bella Heathcote arrived with boyfriend Andrew Dominik, who joked, “We’ve been in an alcoholic fog all weekend.”

“Yeah, we Australians like to drink,” laughed Heathcote. “But really, everyone does seem a lot more relaxed this weekend. We went to all the agency parties last night and it was far less business-y than it usually is.”

The sardine-packed crowd included a bevy of models (Rosie Huntington-Whiteley, Kirsty Hume, Angela Lindvall and Poppy Delevingne); actresses (January Jones, Kate Bosworth, Rose Byrne, Radha Mitchell), and actors (Mark Ruffalo, Adrien Brody, Ioan Gruffudd, Balthazar Getty). While the celebrity dressing team had worked overtime to make sure that each actress had a unique look for the night, the social guests had purchased their own clothes, which resulted in some double vision.

“I can’t believe I have the same jacket as Rosetta [Getty],” said Jacqui Getty of her black and white striped blazer, also sported by her cousin, Balthazar’s wife. “At least she’s my cousin.”