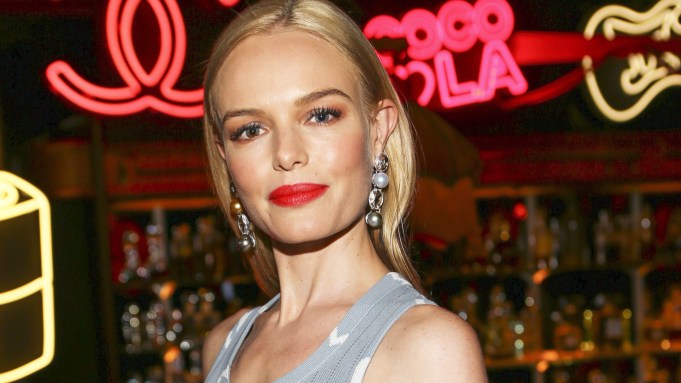 Most of the guests at Chanel’s “I Love Coco” party on Thursday night already had put on their best faces in anticipation of the cameras and the see-and-be-seen crowd at Bar Marmont in West Hollywood, Calif. Still, that didn’t stop them from making the most of the beauty lounge, which was stocked with the newest Le Vernis nail polishes, tubs of Rouge Coco Stylo lip colors, framed vinyl records and pink roses bearing a note to Coco from Oscar (as in the Academy Award) to “stay gold.”

Taking a break from styling Katy Perry, Johnny Wujek plopped down in one of the 10 velvet chairs to have his nails varnished in black. Gina Gershon, who recently finished what she dubbed “a cute movie” called “Permission” with Rebecca Hall and Dan Stevens, received tips — along with freebies — from a makeup artist, who coated her lips in a rich brown and dabbed coral in the center. Dakota Fanning, Angela Lindvall, Soo Joo, Roxane Mesquida, Fuschia Kate Sumner and Gia Coppola were also there to catch up with friends before the lounge opens to the public on Friday afternoon.

Having returned to Los Angeles after more than seven months of filming on location and a quick stop at New York Fashion Week, Kate Bosworth wasn’t taking a break just yet. Not only was she overseeing the building of a midcentury modern house with her husband, director Michael Polish, but the couple planned to swing by another party after the Chanel soiree. Their social calendar also included Oscar celebrations hosted by Jeffrey Katzenberg, CAA and Vanity Fair over the weekend. While Polish picked “Mad Max: Fury Road” for his Oscar pool, Bosworth was rooting for Leonardo DiCaprio. “He’s done such amazing work through his life,” she said.

Only 16, Kiernan Shipka didn’t plan to hit any other shindigs. “My Oscars party is staying at home in my pajamas,” she said. With an equally youthful friend in tow, the “Mad Men” actress did a little bit of everything at the Chanel soiree: dancing to the gutsy folk songs by Swedish band First Aid Kit, squeezing into the photo booth and smiling for the paparazzi with Haya and Sama Khadra, who cohosted with Ellie Bamber, Carson Meyer and Phoebe Tonkin.

When she goes on break from filming her supernatural TV series “The Originals,” Tonkin is prepping to make a secretive movie in April. Even with talk of the Oscars, the Australian model-turned-actress is content with staying on the small screen and bingeing on shows like “The Affair.” “Television is really interesting and dynamic and the characters are layered,” she said.

Ashley Benson, who plays one of the five women tormented by a stalker named A on “Pretty Little Liars,” looks forward to working on a “super-cool indie film” and collaborating with directors like Woody Allen and Darren Aronofsky following her series’ upcoming final season. She also has another fantasy: “My dream is that I’m A and I kill everyone.”

Janelle Monae fulfilled her goal of breaking into film by portraying a main character in “Moonlight,” which is produced by Brad Pitt and directed by Barry Jenkins. Slated to perform at a private party in L.A. on Friday night, the charismatic singer is skipping the Oscars to join “Selma” director Ava DuVernay in Flint, Mich., for a fund-raiser to benefit victims of the city’s dire water contamination. Could she picture herself on stage at the Oscars next year? “Whatever the future holds for me,” she said, before sneaking into the photo booth.