In the midst of the weekend's heat wave, Eilish performed an acoustic set at Sunset Beach on Shelter Island during Chanel's celebration for the J12 Yacht Club pop-up. 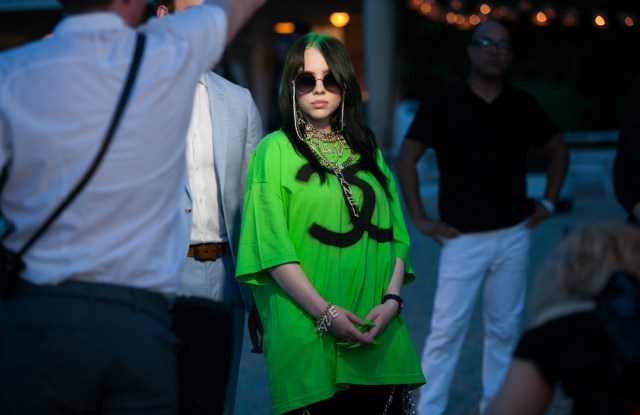 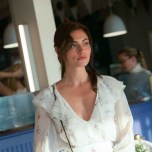 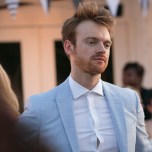 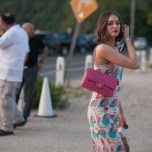 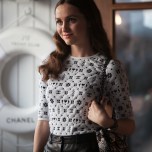 To be fair, Billie Eilish was not exactly dressed in breathable summer clothes: the 17-year-old sensation paired a neon green T-shirt with black sweatpants, a boot for her sprained ankle (wrapped in a Chanel logo scarf) ⁠— and lots of Chanel jewelry, including the J12 watch that was the centerpiece of the evening’s festivities.

But layers aside, it was hot on Saturday — you may have heard? — with a heat index reaching well past 100 degrees on Shelter Island (and not an air-conditioning unit to be felt inside Sunset Beach, save for the pop-up Chanel boutique where the watches were on display for purchase, all the better to browse a $273,000 pavé diamond band).

While guests had the option of arriving scenically by boat, most opted for the air-conditioning (and hair-preserving) mode of car. Despite the sand, several celebs bravely wore stilettos (and, perhaps more bravely, the house’s signature knits and tweeds despite the climate).

Froseth, who has been a Chanel ambassador for a few months now, said her favorite perk so far — aside from the clothes — has been getting to meet her idols.

“They have such an amazing family — a lot of idols I look up to, like Marion [Cotillard] and Margot Robbie,” said the actress, who is about to wrap filming on a show called “Looking for Alaska.” “I got to meet Marion which was such a dream — and briefly Margot.”

Morrone was without a J12 for the night but says she is rarely without a watch.

“I don’t leave the house without watches most of the time — but my watch is never on the right time. I travel too much — I actually don’t know how to fix the time,” she said. “But it’s stuck on L.A. time so whenever I go home, at least I’m on the right time.”

In addition to Eilish, the actress’ favorite music this summer is H.E.R.

“I saw her perform at Coachella and she is one of the most amazing live artists I’ve ever seen,” she said. “It’s a really girl’s girl album.”

Eilish’s brother and collaborator Finneas said that in addition to the new Bon Iver, he’s been listening to a lot of Camila Cabello, with whom he is writing music at the moment.

“The stuff that she’s working on now that isn’t out yet is really exciting,” he said after posing for photos with his girlfriend, Claudia Sulewski. “I feel like I have the most infuriating music library because I’m like, ‘Oh, this song I’m listening to,’ and they’re like, ‘When is it out?’ and I’m like ‘Not for four months.’”

After sipping Aperol spritz, margaritas and lemonade with basil and cucumber, guests sat down to a sunset dinner before gathering in the back for Eilish’s acoustic set.

Chanel was early on Billie Eilish; back in the fall of 2017, when she was a relatively unknown rising 15-year-old singer, the brand had her perform at their Coco Club party at The Wing in Manhattan. Now, as the first artist born in the 2000s to achieve a number one and with the largest first-week sales for a debut in the U.S. since 2010, Eilish was a rather big get for the evening (as evidenced by the screaming teenage girls queued up across from the hotel).

Eilish, who was said to be keeping interviews short as to save her voice but was generously chatty with reporters, was decked in many a Chanel diamond.

“Well, I mean first of all, this s–t is fire,” Eilish said, motioning toward her borrowed jewels. “I mean, I guess I’m a Chanel girl in every way possible. They were one of the first brands, name-type brands, who showed any interest in me, any appreciation. And it’s crazy that this is my second time performing at a Chanel event because it’s, like, Chanel, dude. Chanel!”

While the full-on bling might not be her usual look, her day-to-day look is “honestly, a lot though,” she said. “I mean obviously not the archives of Chanel, because I don’t have it, but no, I feel like this year, at the beginning of this year I wore like six watches and a ring on every finger and like f–king 14 chains and all types of earrings. I love, love jewelry. It could be fake, if it looks cool. And some real jewelry looks stupid as hell. If it looks dope it’s dope.”