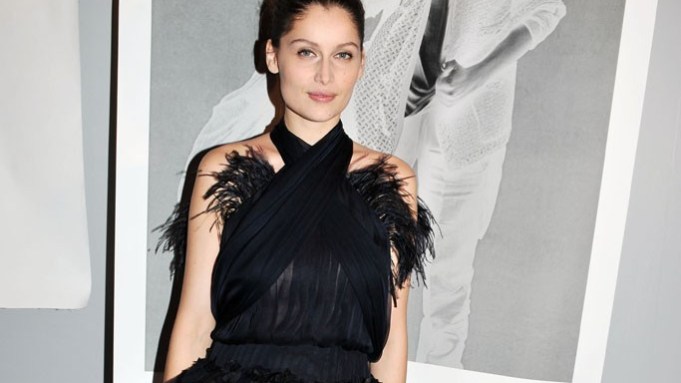 What’s black and white and famous all over? Chanel’s roving “Little Black Jacket” exhibition, which came home to roost Thursday night at the Grand Palais for a two-week run — kicking off a month of photography events in the French capital.

Laetitia Casta, Gaspard Ulliel and Daphne Guinness were among those who checked out the display of photos by Karl Lagerfeld in collaboration with stylist Carine Roitfeld — and then shimmied into a petite one-night-only Chanel disco, headlined by a performance by Frank Ocean.

Down on the dance floor, Haider Ackermann dodged questions about rumors that he is in the running to take over as creative director of Balenciaga, following the departure of Nicolas Ghesquiere. “No, please, please, please,” he winced. “I’m enjoying Karl tonight.”

In the crowded upstairs exhibition space, many could not resist checking out their portrait up close. Casta noted that Lagerfeld shot one single picture of her. “I was pretty surprised, not being used to that, and finally I said, ‘Why not?’ It was a moment,” she recalled.

Ana Girardot confessed to feeling “terrified” at the prospect of posing for the designer, but he quickly put her at ease by allowing her to keep on her cut-off denim shorts. “He told me not to worry and to stick my hands in my pockets,” she said.

Singer Ayo took a tumble during her studio session, which required her to wear drag-queen-style platform shoes. “I’m a bad poser to begin with, and then wearing those shoes made it even harder for me, and at one point I fell down,” she laughed.

She had fond memories of the experience. “I love the picture, probably because I don’t recognize myself, because usually I don’t like looking at pictures of myself, so this one is OK. I do look like the First Lady, kind of, huh? There’s a bit of a [Michelle] Obama thing going on there,” she said.

Like Lagerfeld’s right-hand woman Virginie Viard, Theophilus London showed up in the black jacket he wore for the shoot, accessorized for the evening with a thick gold chain.

“This is like our jean, our T-shirt,” Lagerfeld said of the black jacket, himself clad in an angular black coat by Alexander Wang, his customary high-collared shirt also in a midnight shade.

“Black is a very becoming color on most people, always elegant,” he said, winking behind his velvety black sunglasses. “Black is beautiful, as they used to say in America.”

Obsessed with paper, Lagerfeld noted that it takes four tons of black ink to produce 15,000 copies of the “Little Black Jacket” book. Published by Steidl, the book has sold some 100,000 units.

Especially for the Paris expo, Lagerfeld transformed several photos into what he dubbed “Fire Engravings.” The process of transferring his images onto giant plates of glass involved screen-printing with acid, which eats away areas to later be screen-printed with color, then baking the sheets in an oven at 600 degrees.

Open to the public, the jacket showcase made its debut in March in Tokyo and has traveled to New York, Taipei, Hong Kong, London, Moscow and Sydney. Bruno Pavlovsky, president of Chanel fashion, said the London showcase alone, mounted at the Saatchi gallery for a little over three weeks, attracted 167,000 visitors — a record for the art destination. Berlin and Seoul are the final stops this year, with China and Brazil among destinations in 2013. The executive said the jacket project represents an investment above and beyond traditional advertising to convey Chanel’s creativity and iconic style “with a new angle.”

“You need to be active in all kinds of media: Exhibitions are one way, digital is another. I think we should be everywhere,” he said.

At a time when leather goods get the lion’s share of attention at many luxury brands, a global spotlight on the jacket represents “a very strong sign that Chanel is a fashion house,” Pavlovsky said.

While he allowed it is difficult to track how exhibitions might impact sales in its boutiques, Pavlovsky noted that jackets were already the number-one ready-to-wear category at Chanel in terms of units.

And the top-selling color? You guessed it.