Karl Lagerfeld’s team brought a dose of chic, retro travel to the city.

By Amanda Kaiser and Kelly Wetherille on March 22, 2012
View Slideshow 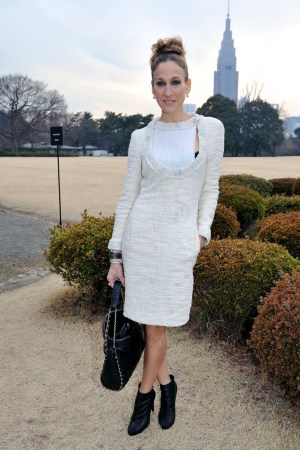 Karl Lagerfeld’s team brought a dose of chic, retro travel to Tokyo, re-creating the futuristic airplane set he used for his couture show in Paris to reprise the same spring collection. The massive set made its home in a large park, surrounded by manicured gardens and the first hints of cherry blossoms.

“I think it will be like it was a flight taking off from Paris and arriving in Tokyo. It’s another world,” the designer said on the eve of the show.

Chanel’s celebrity guests, who already made an appearance on Wednesday night at the opening of Lagerfeld’s photography exhibition “The Little Black Jacket,” included Vanessa Paradis, wearing a sheer black lace, knee-length dress, and Alice Dellal, who posed for snaps in a jinricksha, the Japanese equivalent of a rickshaw, before entering the venue.

Sarah Jessica Parker, who wore an ivory tweed dress and swept her hair into a bun, said she has been enjoying her fourth trip to Tokyo.

“We’re trying to just see towns more on the perimeter —very local communities,” Parker said. “We went to a beautiful town that has a lot of traditional little hardware stores. And we also went to [the temple] Senso-ji. It was beautiful,” she said, adding that the food was a particular highlight.

Parker, who is traveling with her young son, mentioned that she had also paid a visit to the iconic Tokyo toy store Kiddy Land.

Dellal said her time in Tokyo has been “so overwhelming” but she is enjoying herself.

“I love not knowing anything about the city I’m in,” she said. Dellal also mentioned that she hopes to have some time to do a bit of shopping before she leaves the Japanese capital. “I need to buy more useless stuff I’ll never need — but that’s what I love doing,” she said.