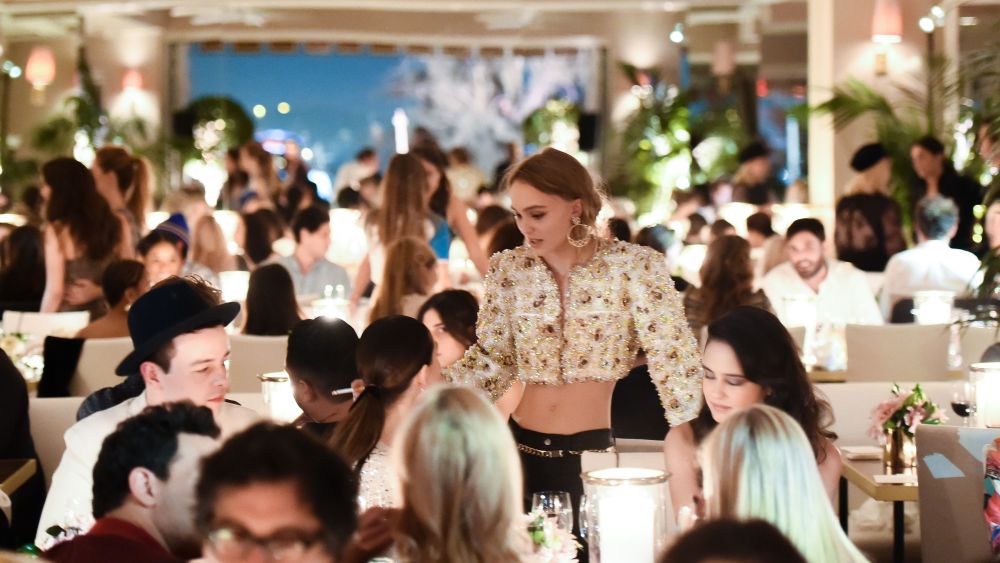 “It feels incredible to be a part of the Chanel family,” Lily-Rose Depp said. As the face of Chanel’s new fragrance No.5 L’Eau, the ingenue, whose mother, Vanessa Paradis, was also a Chanel spokesmodel in her teen years, was on hand for a dinner held by the fashion house in her honor at Sunset Tower on Thursday night.

“I’m so honored,” Depp continued, clad in an embroidered crop top from the current fall/winter collection. “I’ve always loved and admired the Chanel fashion house since I can remember. Karl [Lagerfeld] is somebody that I look up to and that I think is such an incredible talent and such a genius.”

Directed by Johan Renck, her campaign launches this fall. “It was really fun,” she said of the shoot. “We had a really great team. It was kind of a surreal day. I never imagined that I would be there.”

Clearly Depp knew the script and stuck to it — especially since select reporters were allowed only two questions apiece with her. But the daughter of Johnny Depp and Paradis also was game to discuss her budding acting career. She recently reprised her role as a convenience store clerk in Kevin Smith’s comedy/horror film “Yoga Hosers,” which premiered at the Sundance Film Festival in January. Earlier this month, she attended the Toronto International Film Festival for her drama “Planetarium” with Natalie Portman, and just days ago she hit the Paris premiere of “La Danseuse” (“The Dancer”), in which she stars alongside Soko and Melanie Thierry. Of acting, Depp said, “I like the way it feels to put yourself in somebody else’s shoes and just kind of forget yourself and just dive into a character. I really like that feeling. That’s what, you know, brought me to [acting].”

“She’s so chic and beautiful,” said Milla Jovovich, who is no stranger to Chanel campaigns. “I think the fact that her mom was also the face of a Chanel perfume is so perfect.” Chanel’s perfumer Olivier Polge agreed. “I think she embodies the scent very well because of her freshness, her spontaneity,” he said, adding that N°5 L’EAU was a “contemporary” take on the classic scent. “I think it’s important to keep it alive.”

Meanwhile, another notable teenager made her first fashion-event appearance. Ava Phillippe, the 17-year-old daughter of Reese Witherspoon and Ryan Phillippe, chatted with tablemate Rowan Blanchard. The young women then hit the terrace as rapper Nas performed a medley of his greatest hits, including “If I Ruled the World” and “Hate Me Now.”

“Whoever called me to be here, I was shocked,” the rapper said between songs with the skyline behind him. “But I appreciate it. I love Chanel. It’s one of the finest brands in the world.”

As the night came to an end, Phillippe’s Oscar-winning mother met her daughter at valet where the two women were whisked off together into a black town car. Maybe next time, the evening could be in Phillippe’s honor.