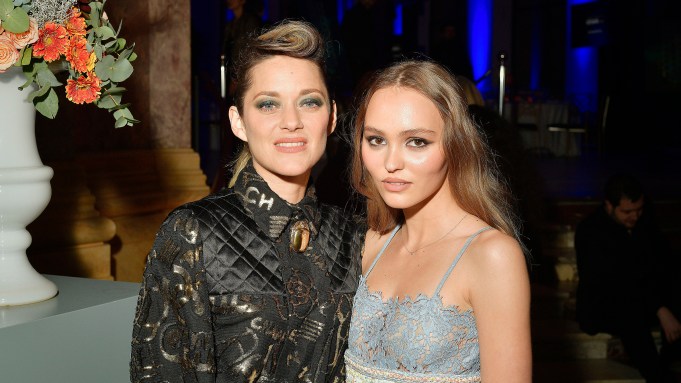 PARIS — Is there anything more daunting than playing the role of the alluring love interest in a romantic triangle involving a real-life couple?

“It wasn’t weird at all. We’re all actors,” she laughed, adding that she was hooked from the first reading on the dark plot of “L’homme fidèle,” where she plays alongside onscreen and real-life couple Louis Garrel and Laetitia Casta.

The budding actress and face of Chanel No. 5 perfume is one of the 34 young French stars – 17 actors and 17 actresses, each paired with a chaperone for the evening – competing for the award for most promising actress or actor at the Césars, the French equivalent of the Oscars, scheduled for Feb. 22.

In between fielding questions, Depp hung on the arm of her chaperone, film director Rebecca Zlotowski, who gave her her big break in 2016’s “Planetarium.” “Rebecca helped me let go,” said Depp, who met Zlotowski four years ago at the tender age of 15. “She taught me to let my feelings run free when I’m acting.”

That evening, important wisdom was shared between seasoned actors and their protégés, especially between women. Sarah Perles, who played in “Sofia,” a harrowing tale about a 20-year-old in Morocco facing the consequences of giving birth out of wedlock, couldn’t control her tears as she listened to her chaperone Monica Bellucci.

“I have one piece of advice for you: passion,” Bellucci told her, pausing to look her protégée straight in the eyes. “Making it in the film industry is always a hard track to follow. You need to believe in yourself and to do all your projects with your heart.”

Bérénice Bejo’s advice was more practical. “The best way to make this sort of event less intimidating is to become friends with the photographers,” she confided to Matilda Lutz, who starred in “Revenge,” minutes after their photo call. “When they like you, they look out for you: they won’t use bad pictures of you, or they tell you to fix your skirt if you’re accidentally showing too much flesh. Once you know you’re with friends, you’ll be able to relax.”

Gaspard Ulliel, showing up to support his friend Roman Kolinka, likened the evening to “an outing with mates,” while Jean Dujardin and his ward Christophe Montenez swapped memories of filming “Le Retour du héros” together. But others were only just meeting.

“I’m a little intimidated,” said Diane Rouxel, who played the lead role in “Marche ou Crève,” to Kristin Scott Thomas, who found the idea quite entertaining.

“It’s hard to give specific advice to young actors, because acting is such an instinctive and personal thing,” mused the British actress. “I’ve been doing this job for a very long time and I’ve never met anyone who works like me.” Then again, she’s one of the few actors to work both in French and English. “We should all keep doing it as much as possible while we still can, if you follow my meaning,” she said.

Minutes before the stellar crowd took their seats for the Révélations dinner, Marion Cotillard swooped in to greet Bruno Pavlovsky, president of fashion at Chanel. “Being present alongside this year’s shortlisted talent is a way to embody the long history linking Chanel to the world of film,” he commented. “We want to be there for the people who represent the future of creativity.”

One of them is Camille Cottin, not a Révélation this year but Chanel’s latest ambassador. Cottin, one of the main characters in the hit television series “Call My Agent,” discussed her humorous ad campaign for the Chanel J12 watch with “Climax” actress Souheila Yacoub.

“I really wanted to actually jump in the Seine, but the insurance company forbade it,” she said of the video in which her character hops on a canal boat to use as a taxi. “Then again, I wouldn’t have managed a triple jump. In fact, I would probably have done a very ugly jump.”

“That wouldn’t have been very Chanel,” laughed Yacoub.