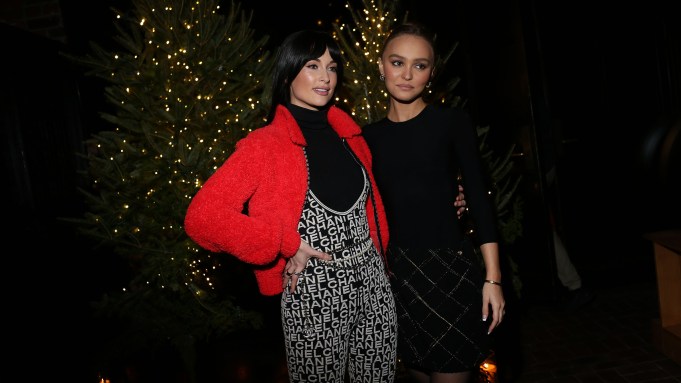 It’s going to be hard attending holiday parties moving forward that do not feature the following: a Chanel-adorned ice skating rink, ornament decorating and postcard-writing stations, oversize goblets of chocolate mousse for communal scooping and, oh yeah, a performance by a K-pop band that had the festive fashionistas giddily bopping along as if they were pre-teens again seeing “Backstreet Boys” in concert.

Yes, the Chanel No.5 In the Snow party Tuesday night was very adorable. Lily-Rose Depp, Chanel ambassador and face of the fragrance, was on hand as host, and was joined at The Standard, High Line by guests Diane Kruger, Kacey Musgraves, Jemima and Lola Kirke, Ella Hunt, Grace VanderWaal, Soo Joo Park, Anna Baryshnikov, Herizen Guardiola, Kilo Kish, Willa Fitzgerald, Zosia Mamet and more, all in their Chanel seasonal best.

The action on the skating rink was left to professional (can’t risk a fall in Chanel now can we?) but Depp said if given some time, she could take a turn on the ice.

“My ice-skating skills? I like to think they’re alright. It always takes me a minute to get the hang of it, but I think they’re alright, once I get into it,” the actress and model said on the red carpet, the grand finale of arrivals. “[It’s been] two years so I’m going to need to get back on the horse a little bit.”

For 2020, Depp said she’s resolving to be better to the environment.

“It’s always just about bettering myself — but that should be everyone’s every year resolution. Concretely, to use less plastic should definitely be on everyone’s list and it’s on mine,” she said.

The night concluded with a performance by Monsta X, who made fans out of most of the audience by the time their set finished.

Through a translator, the group — comprised of Shownu, Minhyuk, Kihyun, Hyungwon, Joohoney, and I.M. — said the Chanel party was their version of holiday plans.

“Actually we don’t have holidays,” they said. “We don’t have a holiday but I think today is a holiday for us, because it’s fancy.”

In 2020, the group will release an English album, called “All About Luv,” which they answered with when asked for new years resolutions.

Naturally, they each wore Chanel for the night, and described their personal styles with flair:

A 2020 fashion mood board if there ever was one.

Amy Schumer Lights Up the Stellabration