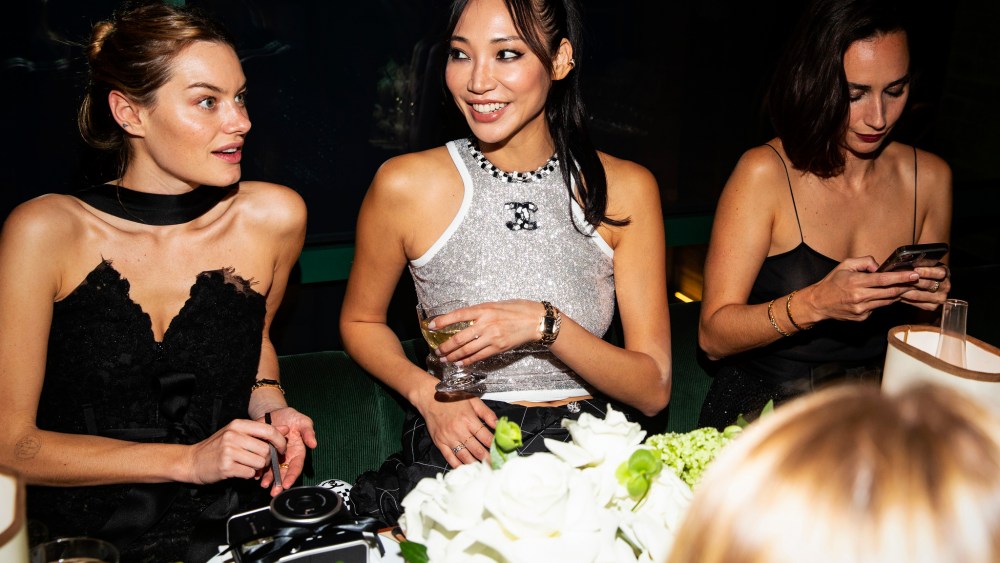 One of the many markings of a fashion dinner is they’re often held in the city’s newest and buzziest venues, as there are few things fashion people like more than sneak peeks and being in the know.

Chanel offered its guests just that Tuesday evening by hosting an elegant dinner in celebration of the new Premiere original edition watch at Casa Cruz, the London import that recently opened in a six-story townhouse on the Upper East Side.

The night began on the rooftop terrace, where an indoor bar spilled guests out onto the open-air deck, as white roses sat on the marble tables and pink striped canopies provided cover. Guests were almost exclusively dressed in black and almost all in Chanel at that, making for quite the grown-up vibe.

Soo Joo Park was the woman of the hour, as she is the face of the new Premiere watch campaign.

“The shoot was in Paris after the ready-to-wear show, and I got to wear the dress that I wore for the Métiers d’Art show, where I performed and sang, so that was really special to me,” Park said during cocktails.

Park, it turns out, is the perfect face for the watch, as she was already the proud owner of one before becoming the campaign star.

“My first watch I ever owned was probably a Baby G-Shock, but my first grown-up watch was the smaller Premiere. I got it about eight years ago,” Park said. “I saw it and I was taken by it. I was so entranced by the minimal design. It’s a smaller octagonal watch face with diamonds on it. There’s nothing else like it.”

The model and musician said when it comes to Chanel watches, she appreciates that they aren’t just smaller versions of men’s watches, but watches specifically designed for women, much like all of Chanel’s designs.

“Not only in watches but in fashion, the house of Chanel really is about that: it’s about designing for women,” she said.

Around her, the socializing continued, as it seems the excitement of post-summer reunions has yet to wane.

“We saw each other in Aspen at brunch!” one guest said by way of greeting to a familiar face (from Aspen to Casa Cruz, darling!).

Congratulations were passed to Athena Calderone on her new Crate and Barrel collaboration, and Barbara Bush and Jessica Seinfeld both greeted celebrity stylist Kate Young before chatting with Thakoon.

“I wish we could smoke cigarettes here,” Rebecca Dayan sighed, ever the French girl.

Downstairs on the fifth floor, where dinner was served, David Neville was politely requesting a beer — a Stella, specifically — from the waitstaff, who’d been passing around the accustomed Champagne.

“A Brit likes a Stella, what can I tell you?” the server said to her team as the request was put in.

Guests made their way to their tables, where a Polaroid camera rested on each place setting (is there a cuter photo op than girls in Chanel taking Polaroids of one another? We think not). Tins of caviar-topped mashed potatoes were swiftly rolled out, wine was poured and the night was off and running.