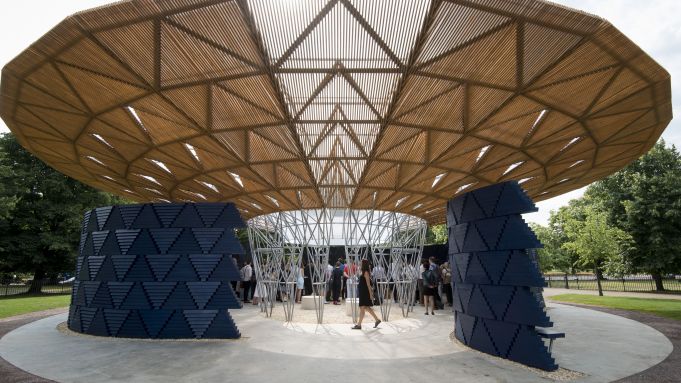 BLOWING HOT AND COLD: “I’m wearing a vintage Victorian cape — and I’ve brought a big sun hat for the rain,” said the jeweler Cora Sheibani, whipping a floppy, cotton wide-brimmed number from her bag. “It’s not the first time I’ve had to dress for this weather at the summer party.”

They crowded onto the main gallery’s lawn in Kensington Gardens, under the futuristic hut-like pavilion designed by Diébédo Francis Kéré, an architect from Gando, Burkina Faso who leads the Berlin-based practice Kéré Architecture.

Kéré is the 17th architect to accept the galleries’ invitation to design a temporary pavilion on its grounds, and he delivered a geometric color-blocked creation made from cobalt blue triangular paneled walls and disc-shaped roof.

The structure was inspired, he said, by the tree that serves as a central meeting point for life in his hometown of Gando. The roof is meant to mimic a tree’s canopy, allowing air to circulate and offering shelter against London rain and summer heat.

“In Burkina Faso, the tree is a place where people gather together, where everyday activities play out under the shade of its branches,” said Kéré, adding that he wanted the pavilion to be “a beacon of light, a symbol of storytelling and togetherness.”

He certainly understands the ups and downs of the London weather, which was broiling last week and autumnal these last few days.

Guests fell into two distinct groups: Some wore outfits that were barely there — “The adrenaline will keep me warm,” said one guest in a slinky, deep-cut dress — while others bundled up. Rocha was wearing a black marabou scarf around the neck of a flower-embroidered dress — a sample — from her fall 2017 collection.

“It’s the summer party, but it’s still England and you need coverage,” said the designer, adding that she’s spending her summer in London “working my little bottom” off, as her boyfriend has a film project to work on locally.

Ilincic, who was chatting to Rocha dressed in a black collarless coat with full sleeves from her own archives, said she’s headed home to Montenegro for part of the summer and on to Formentera. “And that’s enough — I have a show in September!”

Formentera, a short hop from Ibiza, remains the go-to island for many a London-based designer. Why not? It’s hot, tranquil, and there are only a few hotels. Alice Temperley, who was dressed in a sequined cold-shouldered jumpsuit of her own design, said she’ll be spending time on the island with her son, in addition to holidaying in Greece and her home county of Somerset, England.

Owens, meanwhile, was on a short visit to London with his wife Michele Lamy to eyeball 100 identical mannequins for his upcoming retrospective at the Triennale in Milan. “I’m free, in full control, and get to paint myself in the best possible light,” said Owens of the show. “And that is rare. Usually, retrospectives are for after you’re dead.”

Basmajian put his personal stamp on the event, designing the navy camouflage jacket that Hans Ulrich Obrist, artistic director of the Serpentine, was wearing. “He wanted something that worked with the pavilion colors,” said Basmajian of Obrist’s double-breasted jacquard jacket.

The pavilion has an open-air courtyard, and in case of rain, an oculus funnels the water that collects on the roof into a waterfall that will eventually irrigate the park.

The roof and perforated walls are made from wood. At night, the pavilion looks from the outside as if it’s twinkling because of all the activity inside.

“In Gando, it is always easy to locate a celebration at night by climbing to higher ground and searching for the source of light in the surrounding darkness. This small light becomes larger as more and more people arrive to join the event,” he said.