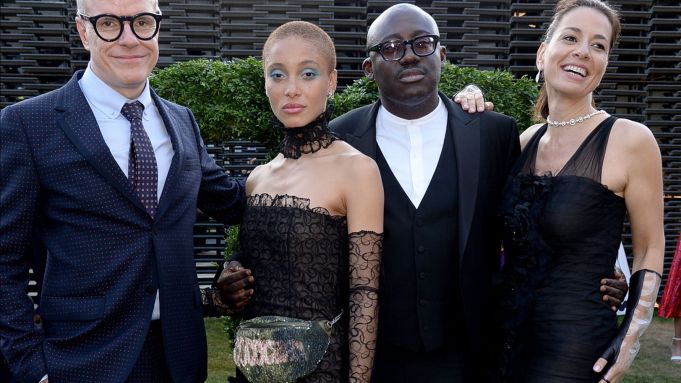 THE HOTTEST TICKET: On Tuesday night, Hyde Park lit up with flashlights, a big stage and a very buzzy crowd. From a distance, the scene wasn’t too different to that of a lively concert, except in this occasion, guests came dressed in couture.

The reason for the celebration was the Serpentine Galleries’ annual summer party, one of the most coveted tickets in London’s summer social calendar, held in partnership with Chanel for a second year.

“Just pick this up and see how much it weighs. It’s all hand beaded. I feel almost like a princess, it’s a really modern-day princess dress and I love that,” said British actress and Chanel ambassador Ellie Bamber, who came dressed in a pink tulle and sequined couture minidress by the French house.

Bamber took a break from shooting her latest film project to join the celebrations at the Serpentine, a gallery she said she’s always drawn to for its “experimental and extravagant” nature.

“I’m currently filming ‘Les Misérables’ with Dominic West, David Oyelowo and Josh O’Connor. We’re shooting in Belgium at the moment and it’s just been the most amazing experience because it’s always been a dream of mine to play such an iconic character. The book is just so beautiful and so romantic as well, I just love the philosophy behind it,” said Bamber, adding that she’s been spending a lot of time researching her character. “The book itself is 1,500 pages long and there’s so much detail in it which is incredible. As an actor to have that amount of detail and emotion to work with, it’s just wonderful.”

Like Bamber, many other Chanel girls, from Adwoa Aboah to Ella Purnell and Alexa Chung, roamed around Hyde Park decked in pearls and tweed galore. Hostess Yana Peel, the Serpentine’s chief executive officer, looked the part in a black chiffon number, pearl sandals and cool PVC fingerless gloves — a nod to Karl Lagerfeld, who was not in attendance but left his mark on the event with a series of sketches of the gallery’s buildings that featured across the venue.

“For us, it’s vital to have this annual gala, this is the event that supports the 200 creatives we work with annually, and they are architects to artists to designers to musicians. So, for us it’s really an annual celebration of their amazing endeavors, their collaborations and also for the supporters who make this all happen,” Peel said. “We’re a nonprofit arts venue welcoming one and a half million visitors each year for free access. As we head into our 50th anniversary, these are the people that are helping us think what the next half-century will look like.”

The gala also marked the opening of the Serpentine’s summer exhibition “Christo and Jeanne-Claude: Barrels and The Mastaba 1958-2018” and the debut of its new pavilion, by Mexican architect Frida Escobedo, which this year takes the form of a symmetric structure featuring stacked rectangular tiles that bring British and Mexican cultural references together.

“Frida Escobedo joins us from Mexico City, she’s the youngest architect in the 18-year history of the program, and also the first female lead practice since Zaha [Hadid designed the pavilion] in 2000. What she’s done is really mix that element of global and local. We want to offer her a platform to gain more recognition in the U.K.,” said Peel, emphasizing that through its choice of artists, the gallery wants to pass on a message of inclusivity. “Look, Frida is 38 and Cristo is 83. The Serpentine is open for everyone, it’s not for the few or for the insiders.”

Peel also ensures that both she and her guests have fun along the way.

“What’s next? Can we dance now?” she said after spending the first part of the evening greeting guests and posing for pictures.

As the sun went down, guests — including the likes of Ciara, Lady Kitty Spencer and designers Mary Katrantzou, Emilia Wickstead, Alice Temperley, Christopher Kane, Erdem Moralioglu and David Koma — did let their hair down and started dancing to musical performance by Nile Rodgers and the band Chic. They also took advantage of the glass ceiling of the pavilion for mirror selfies and experimented with the immersive installations scattered around the park, from spray painting using light to create ephemeral works of art to getting their portraits taken by the Google Pixel 2 against a futuristic, colorful composition.