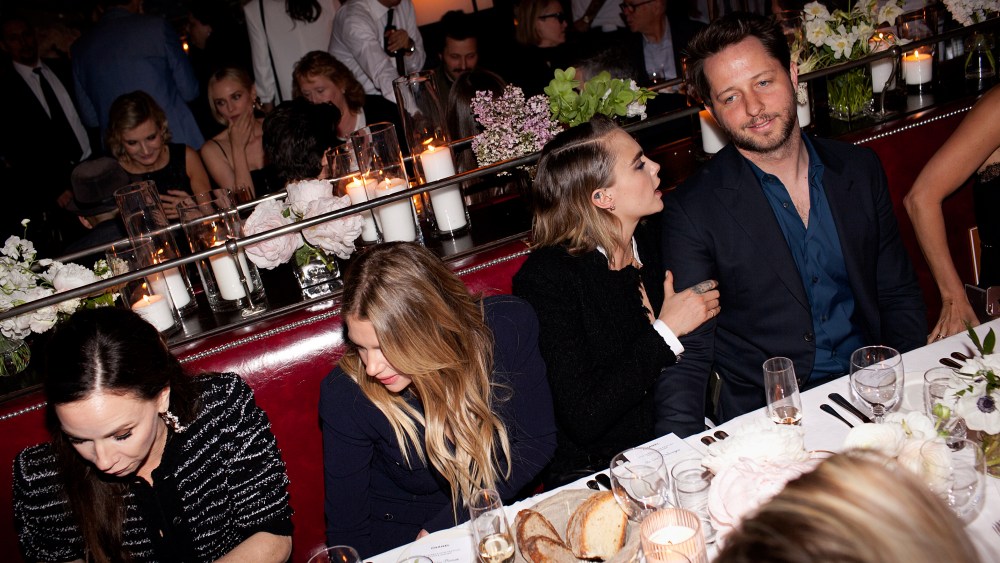 Cara Delevingne and rumored girlfriend Ashley Benson kept things coy on the red carpet outside Balthazar, where on Monday evening Chanel was hosting its annual Tribeca Film Festival artist’s dinner. After posing separately, the two made their way inside the brasserie, where Delevingne immediately grabbed Benson’s hand, and led her to the bar.

The vibe was exactly that: Once inside, celebs relaxed a bit and seemingly had actual fun, many staying stationed by the bar during cocktail hour.

Jemima Kirke also brought a date, her boyfriend Alex Cameron. She was a bit blinded by the photographers’ attention coming off the carpet and entered the restaurant with her hand over her eyes. Once she spotted Theo Wenner, she made a beeline.

Grace Van Patten and Nat Wolff, on the other hand, seemed a bit underwhelmed by the lack of photographers that greeted them when they arrived inside, but rest assured they eventually found their moment.

Julia Goldani Telles and Ella Hunt greeted each other warmly, introducing their respective plus-one BFFs to one another.

Katie Holmes stayed stationed near the bar, whispering to Zac Posen over one shoulder and greeting Delevingne over the other. Alexander Skarsgard hung back near the kitchen, sheltered by a cherry blossom tree.

Angela Sarafyan arrived early, strolling through Balthazar admiring the floral decorations. It was her first time at the annual dinner; she’s in town for the premiere of her movie “Extremely Wicked Shockingly Evil and Vile,” which was purchased by Netflix out of Sundance and will be premiered at TFF by the streaming service on May 2.

“I tend to know within the first three pages if I’m getting goosebumps and I’m like, ‘I’m scared to play this part,’” she said of her role selection process. “It could be a comedy, too — it doesn’t have to be only dramatic roles. I’m quite quirky — I was telling a friend of mine that I’m much more of a circumstantial comedian — I don’t do bits.”

Her next project will be a short film she wrote, which she’ll shoot in black-and-white. “New York is a character in the movie. It’s exploring when you’ve lost hope and your identity, how do you find that again?” she said.

Helena Christensen declined to talk about the Daily Mail article that former British Vogue editor Alexandra Shulman had written about her choice of outfit, which drew much online criticism of Shulman earlier in the day.

“I don’t ever want to put anyone down,” she said simply.

She did say she’s quite a movie buff, though she has yet to see any Tribeca films.

“I’ve seen a lot of movies — the latest I saw was ‘Homecoming’ by Beyoncé. And I wanted to see ‘Us,’ but it’s preorder [on iTunes]. I’m only just now catching up on all the Oscar movies,” she said.

How to Party ‘À La Provençale’

Just before dinner was seated, photographers stood huddled by the doorway, awaiting the arrival of TFF man of honor Robert De Niro. He ducked in at last, looking the least dolled up of the crowd but earning perhaps the most attention from the surrounding press.

“Is that a Juul or a Pax?” Justin Bartha asked his tablemate as she wielded an e-cigarette, a now completely normal conversation topic at a fashion dinner party.

Delevingne and Benson, when approached for a photo, considered it momentarily before declining. (Benson’s choice, for the record.) As Derek Blasberg, made his way over to them they tossed adoring middle fingers his way.

Once seated, Skarsgard leaned over to plant a kiss on Delevingne’s cheek, before settling into conversation with Christensen.

Given the quotient of fashionista starlets in the room, it was only a matter of time before Leonardo DiCaprio rolled through. The reclusive actor, hiding under a Dodgers hat, was whisked through the restaurant at nearly 9 p.m. and plopped down next to De Niro, where a handler shielded off photographers throughout dinner.