The party was one of the highlights of the 30th edition of the Hyères Fashion and Photography festival that just wrapped up. 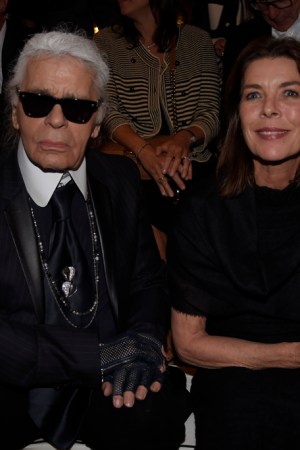 TENDER IS THE NIGHT: Anna Mouglalis read poems by Catherine Pozzi with her soft, deep voice accompanied by French singer Christophe on the piano. The party hosted by Chanel at the Villa La Romaine, overlooking the Mediterranean, was one of the highlights of the 30th edition of the Hyères Fashion and Photography festival that just wrapped up.

Karl Lagerfeld, Princess Caroline of Hanover and Jean-Charles de Castelbajac were among enthusiasts listening to the romantic singer as he performed his hits from the Sixties and Seventies, including “Aline” and “Les mots bleus.”

“There is a very nice ambiance here; there is softness, an energy that isn’t frenetic and openness in general,” said Princess Caroline of Hanover, a judge at the festival that just wrapped up.

Serving on fashion jury was a first for her. “You will laugh. The only time I have been on a jury before was a few years ago for the 150th anniversary of a cathedral; there was a contest for the best chasuble. There was magnificent Lesage embroideries though,” she said with a smile.

“Christophe is the French Johnny Cash,” explained Caroline de Maigret, a self-acclaimed fan of the singer and also a judge at the festival. De Maigret came for the first time to Hyères 20 years ago as a model to walk the students’ show runway.

“He is more Willie Nelson with a dash of Willy DeVille,” a guest argued.

Mouglalis, also on the fashion jury at Hyères, is to start shooting “Baron Noir,” a series for French pay television channel Canal Plus on French politics, costarring Niels Arestrup and Kad Merad. “I play a female politician on the left. It’s a fiction but very much inspired by real politics,” she said.

“I would be unable to be a fashion judge,” said Cassel, member of the photography jury.

“I am in a production drama right now,” said Stephen Gan, fresh from his flight. The cofounder and president of Fashion Media Group, which publishes CR Fashion Book and V magazine, obviously hadn’t had time to get into the relaxed mood of the French Riviera. “Our Rihanna issue [for V magazine] has to arrive on newsstands in one week.”

Donald Potard, mentor of “Project Fashion,” has wrapped up the first season of the French version of the popular reality show “Project Runway.” “It was fun to be in Tim Gunn’s shoes,” he said.